Real-life superhero and comic book legend Stan Lee once said he wouldn’t care for immortality if he had no one to share it with, and that every female character he created was modeled after his wife.

Lee died on Monday at the age of 95, leaving behind the mourning legions of fans of both his work on Marvel comics and the cinematic adaptations that have been shattering box office records in the past decade.

“I just love everything Marvel has done,” Lee said in a September 2015 appearance on RT America’s Larry King Now. “They’re taking the things I created and they’re making them look better than ever! I’m getting the credit for it, and they’re doing all the work!”

“Comic books will be around forever,” Lee told King, as they’re a great way to tell stories. The man behind the incredible Hulk, Thor, Iron Man, Black Panther, Spiderman, Daredevil and the Fantastic Four (among many others) also offered his recipe for writing good characters.

We lost a real-life superhero today. Stan Lee was a visionary, who elevated imaginations across the globe. I’m grateful for the time I got to spend with him. Rest peacefully, Stan. pic.twitter.com/Ie2S18y0A0

“You have to have a character, whether it’s a superhero or not, that people care about,” Lee said, adding that people also need to understand and relate to characters, whether heroes or villains – something modern writers too often forgot.

He also revealed that every female character he ever created and wrote was based on his beloved wife Joan, a British-born model who ended up doing voice acting. She even made it into one of Lee’s famous film cameos, appearing in ‘X-Men: Apocalypse’ (2016).

“I modeled all of them after my wife. Every one of them,” Lee said at the time. Joan would pass away in July 2017, after a stroke, at the age of 95. They had been married for 69 years.

I don’t think I’d want to be immortal… I wouldn’t want to be alive while all my friends and relatives are dying. 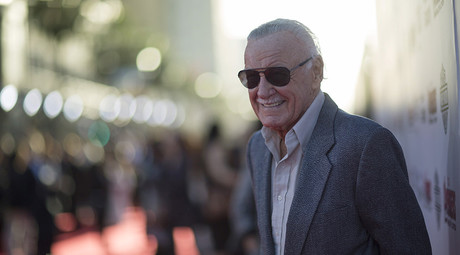 Asked if he was afraid of dying, Lee replied, “No, not at all.” Though he believed there was nothing after death, he admitted: “I can’t imagine nothingness lasting forever.”

Lee got into the comics by accident, applying for a job at a magazine when he was still a teenager and being assigned to the small comics division with Jack Kirby and Joe Simon. He ended up writing comics himself in short order, and helped create characters that would make Marvel a major rival to DC Comics (of Superman and Batman fame) in the 1960s.

He never saved any of the original artwork or editions, however, being too busy creating content to appreciate its collectible value. Even the Remington typewriter on which he wrote ended up lost, destroyed by Joan in one of their arguments, Lee told King with a smile.

Of all the superheroes he created, Lee said he could identify with Iron Man the most, but loved all of them as his own children. Of the actors playing the characters in Disney’s cinematic adaptations, he bonded the most with “Chris [Evans], the fellow who plays Captain America.”

He considered Doctor Doom, the Fantastic Four villain, one of the most unappreciated characters he created. All he wanted was to rule the world, Lee joked, adding, “What’s wrong with that? It’s a legitimate desire.”