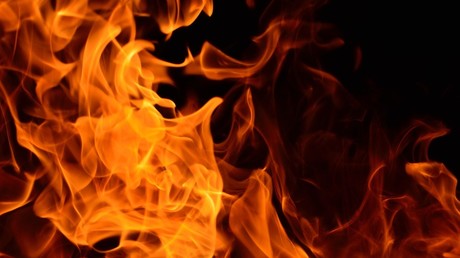 Firefighters in Dallas have for hours been trying to overcome a blaze that has turned an apartment complex in the city’s northeast into a raging inferno.

Dallas Fire-Rescue said that the blaze started at the Cambridge Park Apartments in northeast Dallas shortly after 9am on Tuesday. Multiple units were dispatched to the scene, as the blaze quickly ripped through the complex.

Footage from several news choppers on the scene showed what looked like four buildings gutted by flames, as plumes of smoke billowed hundreds of feet into the air from collapsed roofs.

The tower of smoke and fire could be seen from Interstate 635, which rings the city.

No injuries have been reported at time of writing, but officers with Dallas Fire-Rescue told CBS News that “multiple evacuations have taken place.” Three firefighters were trapped inside the burning buildings at one point, but all have been rescued and checked out by medics.

Another apartment block in northeast Dallas caught fire last week and dramatic video footage showed one woman throw her baby out the window of her burning apartment and into the waiting arms of a heroic passer-by.