The Washington Post has published a raft of commentary recently lamenting what its authors see as the decline of free speech, largely in response to the New Yorker canceling plans to interview Steve Bannon at its annual festival (FAIR.org, 9/7/18). The magazine had faced criticism for inviting Bannon, former chair of the white supremacist Breitbart News and once the chief strategist for President Donald Trump.

The Post’s pieces suffer from dubious, superficial understandings of free speech, and function as attacks on the left that whitewash the far right. 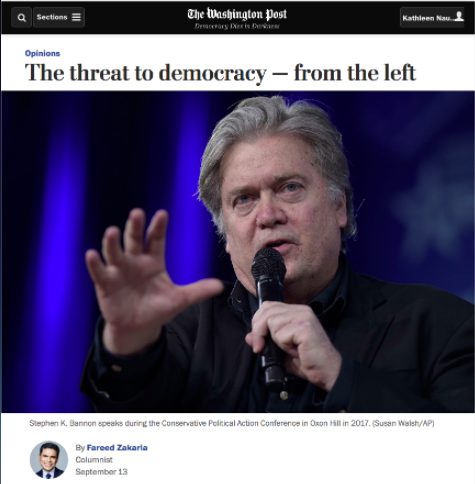 The Washington Post‘s  Fareed Zakaria (9/13/18) fears a return to the nightmare years of the 1970s, when people refused to debate the idea that “blacks were a genetically inferior race who should be voluntarily sterilized.”

Fareed Zakaria (Washington Post, 9/13/18) wrote that “liberal democracy” is premised on “a bet on freedom—of thought, belief, expression and action,” and the New Yorker canceling Bannon is the principal case Zakaria discusses to defend his claim that these rights are under siege. Michael Taube (Washington Post, 9/12/18), a former speechwriter for right-wing Canadian Prime Minister Stephen Harper, likewise saw the Bannon/New Yorker episode as evidence that people in the US are unconcerned with “defending free speech, championing intellectual discourse and allowing opposing voices to be heard.”

If one takes a minimalist approach to free speech, centering on the First Amendment guarantee not to be jailed or otherwise harmed by the state for expressing one’s views, then it’s clear that such a right hasn’t been violated: The New Yorker abandoning plans to host Bannon doesn’t prevent him from thinking or believing anything.

If one takes a more expansive definition of free speech, holding that the right is only meaningful when a person is allowed access to the (usually privately owned) means of delivering their words, there is still no convincing argument that his freedom is being violated here: As Zakaria himself noted, Bannon was recently showcased by the Economist (9/15/18) and the Financial Times (3/23/18), as well as on 60 Minutes (9/10/17) and CNN (6/1/18). It’s hard to portray Bannon as a free speech martyr based on his lack of access to mass media, since he has had more such access than all but a few people in the United States.

Of all the people in the world, 99.99999 percent are not interviewed onstage at the New Yorker festival, so not having that particular platform can’t in itself be a violation of free speech.  Editor David Remnick and his colleagues necessarily have to have criteria for who is chosen to speak, and the vast majority of people can’t meet those criteria. 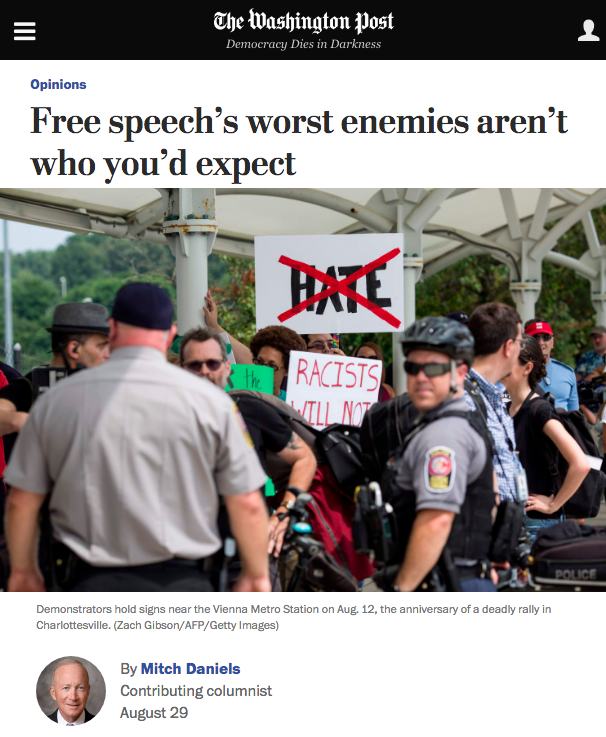 You might think free speech’s worst enemies are federal prosecutors who threaten to put people in prison for protesting, reporting on protests or exposing government secrets—but Mitch Daniels (Washington Post, 8/29/18) sets you straight.

What seems to have rankled the guardians of free speech at the Washington Post is that Remnick announced that Bannon would participate and then changed his mind, after receiving negative feedback from the wider world. The position, then, is that only a small group of insiders should have any meaningful role in deciding who gets to speak on prestigious platforms, and allowing the public to have input on such decisions puts free speech in jeopardy: Speech is free when only elites decide who gets to speak.

While Daniels discusses zero cases to support his claims, and Taube only addresses Bannon’s, Zakaria cites two further instances of colleges disinviting guests as part of his effort to demonstrate that “freedom of thought, belief, expression and action” are endangered: Condoleezza Rice, a key architect of the invasion of Iraq and the resultant hundreds of thousands of dead civilians, and Charles Murray, who uses pseudoscience to contend that inequality is caused by what he sees as the inherent inferiority of black and Latino people, women and the poor.

Yet it’s hard to argue that colleges are obliged to host anybody who happens to have a public profile, or that failure to do so constitutes tyranny. Nor do these authors address the rights of people who work and study on those campuses, and the communities in which they are located, to exercise their freedom of “thought, belief, expression and action” by opposing their schools’ giving racists, misogynists and war criminals a megaphone, thereby increasing their institutional legitimacy. 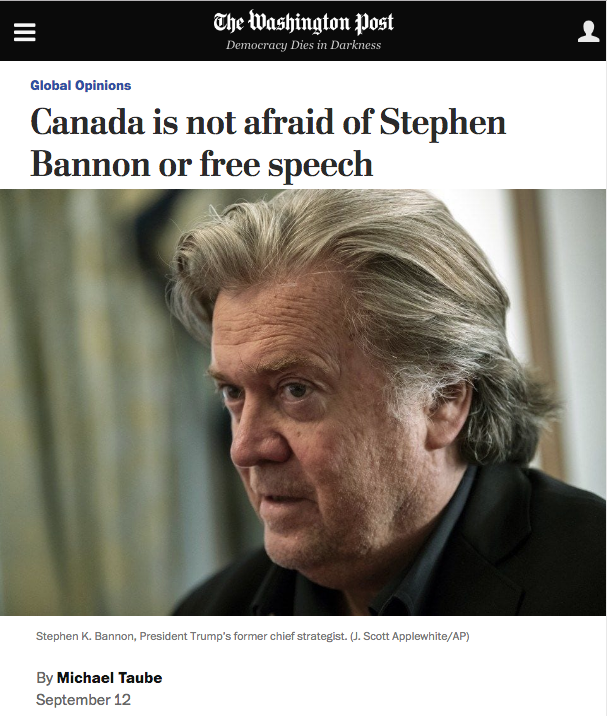 Don’t refuse to debate the far right, says Michael Taube (Washington Post, 9/12/18)–instead, have a debate between the far right and regular right.

Taube described as a “left-wing mob” the celebrities who said on social media that they would withdraw from the New Yorker festival unless it scrapped the Bannon interview. The publication, according to Taube, “caved in to far-left yelps of fury.” He went on to write:

Unfortunately, the growing number of Americans situated on the radical left are getting louder and more aggressive. They reject free speech, they refuse to tolerate differences of opinion, and they don’t want opposing views to share the same forum or venue.

According to this framing, the left is a mindless horde of tyrants, yet neither Taube nor any of the authors I’m discussing can enumerate a single leftist who “reject[s] free speech,” even though the crisis is supposedly so dire that it merited three op-ed columns in a single paper in two weeks.

These writers seem not to recognize that “leftists” and others may disagree with the decision to amplify some views, not because they’re “opposing,” but because they’re abhorrent. Should a black person have to debate their humanity? Is that what we mean by democratic debate? There are a great many people who believe the Earth to be flat; are their voices censored by authoritarianism, or simply deemed unworthy of serious consideration?

Zakaria’s article was titled “The Threat to Democracy — From the Left.” He claimed that there is

a worrying erosion of a core democratic norm taking place on the left. It has become commonplace to hear cries on the left to deny controversial figures on the right a platform to express their views.

The message underlying Zakaria’s comments is that people who care about democracy need to reject the left, but it’s leftists, who advocate and organize for extending democracy for workers, women and ethnic minorities, who have won the partial gains that have been made in these realms, over opposition from conservatives and liberals.

Daniels referred to conservatives as being “on the receiving end of today’s repression,” indicating that it’s leftists who are the “authoritarians” carrying out this “repression.” The not-very-subtle implication here is that conservatives are in need of solidarity, and that leftists, apparently a source of despotism, must be opposed.

Meanwhile, activists on the left face actual repression from conservative forces that’s much more serious than racists and war criminals being disinvited to a New Yorker festival or a university talk:  Hundreds of activists face criminal charges for resisting Trump, white supremacists and neo-Nazis; 57 US senators want to make it a federal felony to participate in international boycotts of Israel or Israeli settlements; police infiltrate and spy on Black Lives Matter activists, while the FBI’s domestic terrorism unit is deployed against African-Americans opposed to police brutality.

These articles offer what amounts to an apologia for Bannon and his political cousins. In Taube’s article, Bannon is described as “highly controversial.” Taube praises the Toronto-based Munk Debates, which scheduled a debate between Bannon and George W. Bush speechwriter David Frum, for “showing real courage of conviction and the willingness to have a controversial figure speak in front of an audience.”

To characterize Bannon as merely “controversial” is to sanitize his views, considering that he oversaw a media outlet that fostered antisemitism, spread Islamophobic lies and ran misogynistic content, to say nothing of accusations of Bannon’s personal animus against Jews and charges of domestic violence.
The closest Zakaria comes to a robust account of Bannon’s views is to say that “some” of them “can reasonably be described as evoking white nationalism.” Merely “evoking” white nationalism is presumably distinct from running a media machine designed to mobilize it—providing “the platform for the alt-right,” as Bannon described Breitbart (FAIR.org, 11/15/16).

Zakaria went so far as to compliment Bannon, calling him

an intelligent and influential ideologist, a man who built the largest media platform for the new right, ran Trump’s successful campaign before serving in the White House, and continues to articulate and energize the populism that’s been on the rise throughout the Western world. He might be getting his 15 minutes of fame that will peter out, but, for now, he remains a compelling figure.

To Zakaria, the left is a threat to democracy, whereas a man who has helped popularize every form of bigotry is “intelligent” and “compelling.” The implicit criteria offered by Zakaria as to who should be granted a prominent platform is proximity to power: If one gave the “new right” (that is, the fascist right) its “largest media platform,” ran a “successful campaign” and served in the White House, and your brand of “populism” is “on the rise throughout the Western world,” then of course you deserve to be onstage at the New Yorker festival.

Other people have different criteria—believing that the idea of treating entire categories of people as subhuman has long been discredited, and that holding up such ideologies as worthy of debate does more to spread than discourage them. But that position will get you denounced in the Washington Post as an enemy of free speech and a “new authoritarian.”