A standard bias in news coverage in elite outlets (Washington Post, New York Times, NPR, etc.) is centrism—using an allegedly objective voice to warn against or critique “extremism” of left and right. Centrist bias sometimes takes the form of inaccurate critiques of broadly popular progressive policies that are quite defensible—such as Medicare for All or raising the minimum wage. Or it manifests itself in inaccurate claims about the impact of right-wing or progressive “extremism” on US elections. 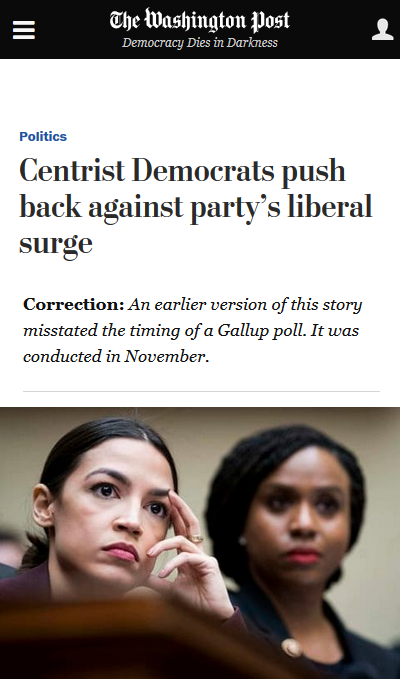 A good example of this status quo bias was provided by the recent Washington Post “news” story (3/1/19) warning of the progressive upsurge in the Democratic Party—”Centrist Democrats Push Back Against Party’s Liberal Surge.” The bias was imparted with the help of “objective” phrases in the reporters’ voice, such as “shoot-the-moon policy ideas” and “hardball tactics of liberal firebrands.” And by quoting in the article a half-dozen sources from the corporate wing of the party, and none from the progressive wing. But more striking was the skewed history and numbers in this paragraph (emphasis added):

Some warned that imposing purity tests could lead to a Democratic version of the conservative Tea Party revolt that transformed the GOP in recent years. That surge has brought Republicans new energy and new voters, but it also cost the GOP some congressional races and legislative victories.

Let’s run the numbers: When the Tea Party revolt began in early 2009, Democrats had the White House and 59 or 60 Senators caucusing with them. Republicans now have the White House and 53 Senators. Democrats had a huge majority in the in the US House with 257 seats, but even after their big comeback win last November, Democrats now have 235 House seats. Democrats had 28 of 50 governorships in the country; the GOP now has 27 of 50. In 2009, Democratic state legislators outnumbered their Republican counterparts by 859 seats; now the GOP has an edge of 379 over Dems among state lawmakers.

The Tea Party upsurge might have “cost” the Republicans in morality and compassion, but not in seats or political power. Activists are hopeful that a solidly progressive platform can bring the Democratic Party a similar advantage. And while Post reporters casually dismiss them as “shoot-the-moon policy ideas,” progressives believe that a country as wealthy as ours can achieve such measures as Medicare for All, constraints on Wall Street and a Green New Deal.