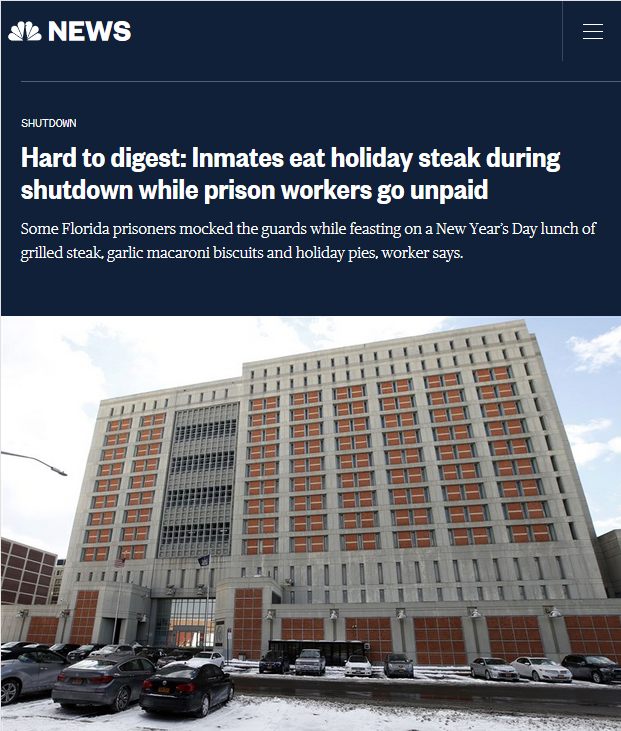 The United States, by all objective metrics, has one of the cruelest, most inhumane prison systems in the world. In addition to having 25 percent of the world’s prison population (despite having only 5 percent of the world’s people), the US carceral state uses tortuous solitary confinement, contains widespread sexual violence, has massive racial disparities, routinely abuses children and is broadly defined by a whole host of other human rights violations. The idea that the US is too soft or nice to prisoners is something even the most right-wing demagogues rarely bother to argue anymore.

So it may come as a shock that centrist, ostensibly non–white nationalist outlets like USA Today, Washington Post, Atlanta Journal Constitution and NBC News thought it newsworthy to point out that prisoners at Coleman federal prison in Wildwood, Florida, received a routine holiday meal that was slightly above their normal, bottom-of-the-barrel provisions. This outrage—clearly fed to the outlets by the federal prison guards’ union—was contrasted with these guards not receiving paychecks due to President Donald Trump’s “government shutdown,” offered as an outrageous unfairness: How dare those hardened criminals live it up while our hard-working government correction officers work for free?

In case you were concerned that the story would not pander enough to racist stereotypes about greedy, lazy prisoners, the Post’s “‘I Been Eatin Like a Boss’” headline should set your mind at ease. The quote was allegedly taken from an inmate’s personal mail  by a prison guard and selectively leaked to the Post, who decided to not only publish it without any context, but led the whole story with it, African-American Vernacular English and all. It’s unclear if it’s standard for prison guards to comb though inmates’ personal mail to find choice quotes to advance their self-serving narratives, but the Post and the other outlets apparently found nothing suspect about this practice.

And what images did they use to convey these luxurious “steak” dinners? Professionally done stock photos of steaks from gourmet restaurants: 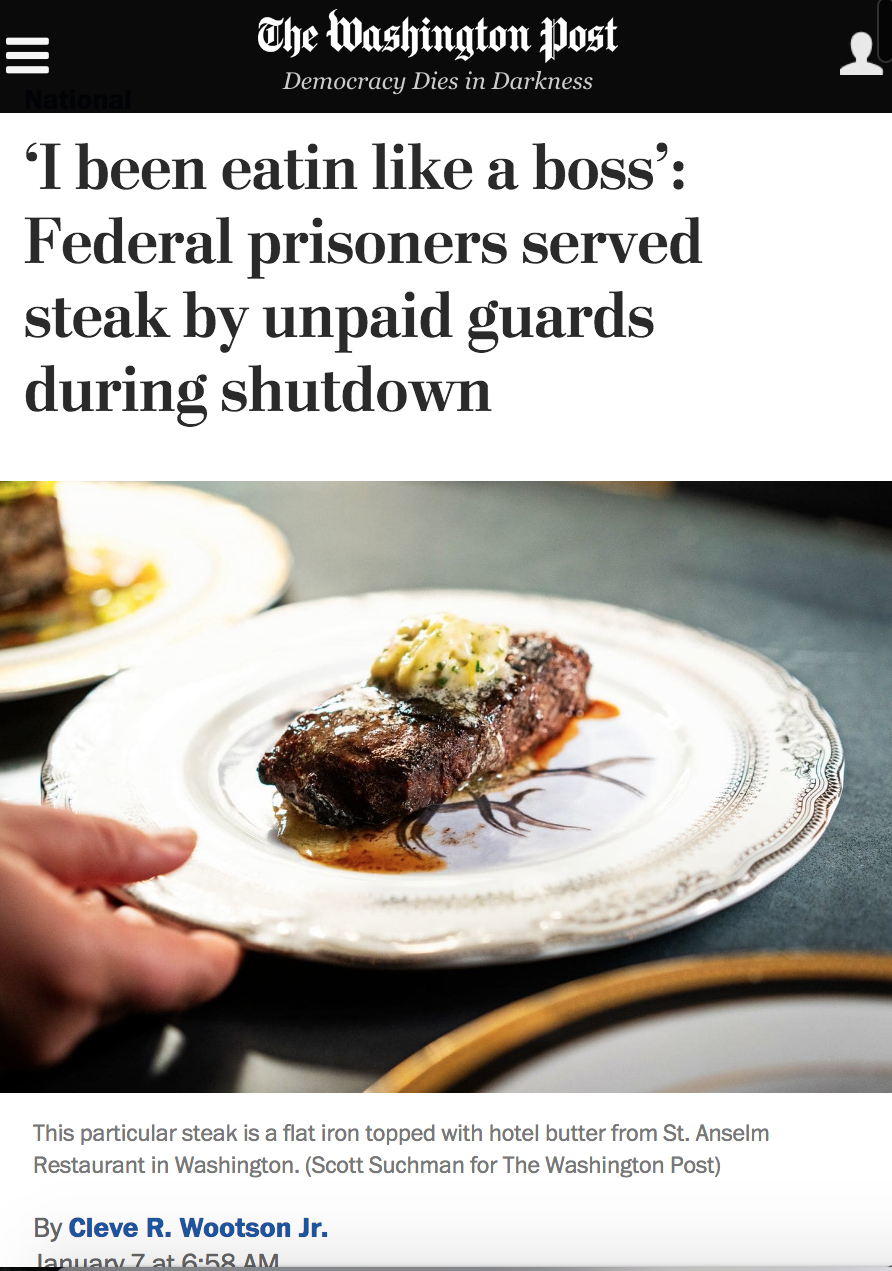 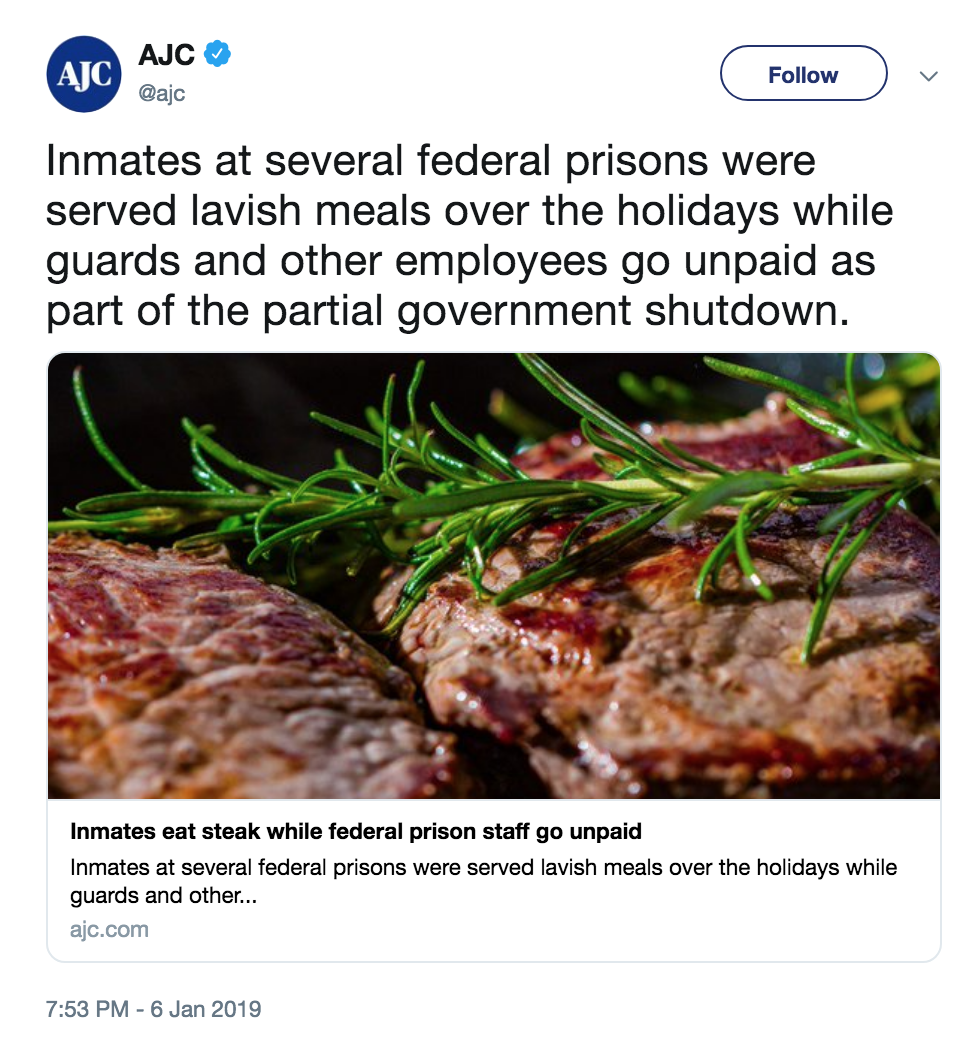 This is likely because if they showed what actual “steak dinners” look like, it might accidentally solicit pity towards prisoners rather than the visceral disgust these stories hope to evoke. Here is an example of a salisbury steak dinner from one breakdown of typical prison food: 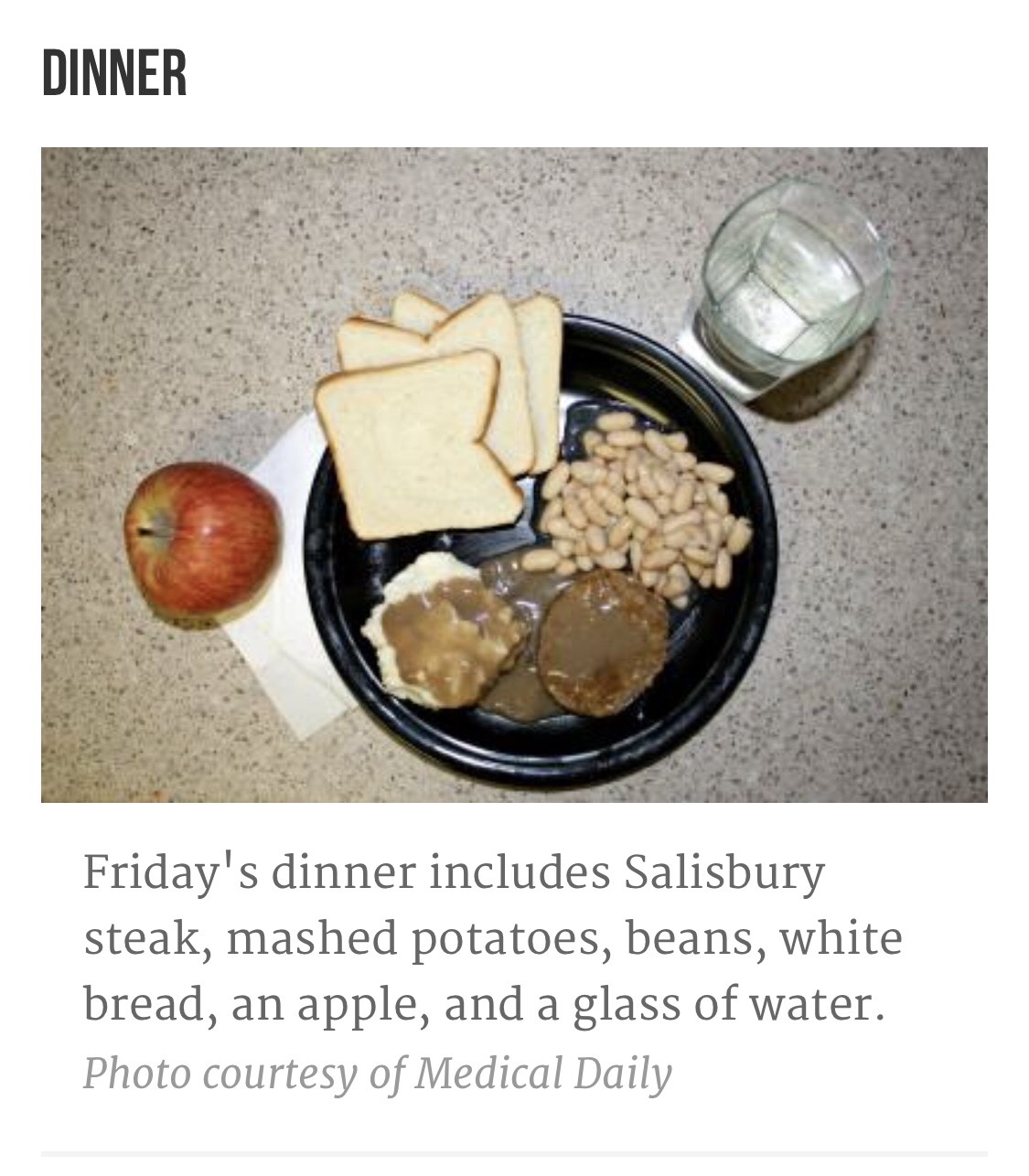 It’s unlikely the aesthetics of what was served to these prisoners would be much different. And even if it were, it’s impossible the “flat iron topped with hotel butter from St. Anselm Restaurant in Washington” the Post used as its image (price: $24) would be any closer to reality. (Twelve hours after posting the story, the Post eventually swapped the picture out for a stock prison image after a torrent of criticism on social media.)

Numerous studies have shown prison food is barely edible and causes high rates of illness. The Atlantic reported in 2017, “Lapses in food safety have made US prisoners six times more likely to get a foodborne illness than the general population.” Indeed, one of the primary demands for last fall’s multi-state prison strike was for higher quality and more nutritious food. That prisoners are given a meal a few times a year that’s slightly above this extremely low standard was the hook for why correction officers not receiving checks was so outrageous. “How could our priorities get so out of whack” is the premise simply taken for granted—a premise, it should be noted, that relies on heavily racialized notions of who’s in prison and who is guarding prisoners.

As prison reform expert and professor at Fordham Law School John Pfaff notes—even if one removes the racist dog whistle and gross prisoner-mocking—the whole basis for the outrage is wildy misplaced. The guards will get back pay after “the showdown” inevitably ends. They’re complaining about having to wait for payment, not working for free. The federal prisoners, who on a regular basis are actually working at very close to free—at $0.23/hr to $1.40/hour—are used, again, as a bludgeon by NBC News:

Adding to the staffers’ bitter feelings, the working inmates were still drawing government paychecks for their prison jobs, which include painting buildings, cooking meals and mowing lawns.

Oh no, prisoners are getting paid slave wages while being locked in cages and stripped from their loved ones. The horror!

For decades, the single uniting theme in white supremacist propaganda has been the idea that African-Americans live high off the government hog while “working class” whites struggle to survive. It was the subtext of a now-infamous 1976 Ronald Reagan speech (New York Times, 2/4/76) when the former California governor accused a “strapping young buck” of using food stamps to buy T-bone steak. The narrative being advanced by the Post and others here is simply a slightly more liberal 2.0 version of this.

One can guess that this racist non-story got through so many editors because it superficially makes Trump look bad by showing how the shutdown he contrived is causing harm to sectors the right typically sympathizes with, such as prison guards. Fighting racism with more racism may, in the short term, be an effective strategy to “win” a 24-hour news cycle, but it’s a journalistically unethical one. By reinforcing caricatures of prisoners living it up while others suffer, these outlets reinforced deeply racialized notions of worthy and unworthy “welfare.” As  with MSNBC’s warmongering around Russia (FAIR.org, 6/24/17) and North Korea (FAIR.org 6/14/18), centrist and liberals attacking the far-right Trump from the right is a myopic, immoral strategy that will invariably result in real long-term harm. 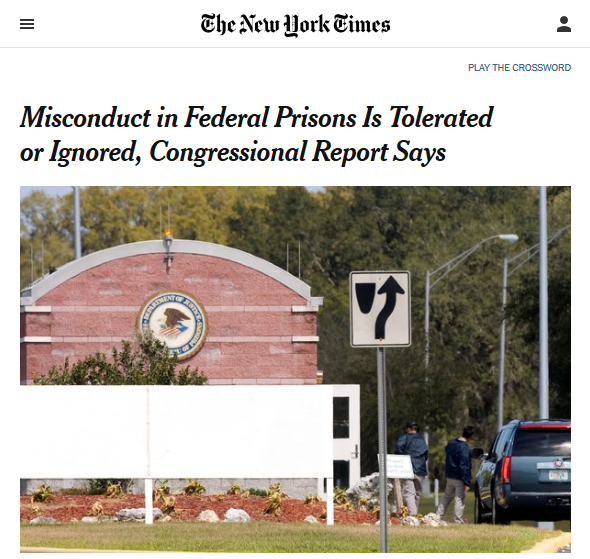 It’s likely not a coincidence that these articles started coming out less than 48 hours after the release of a federal report (New York Times, 1/4/19) that showed rampant abuse and sexual violence in federal prisons, with the steak-serving Coleman prison highlighted:

The Bureau of Prisons settled a large sexual discrimination case in 2017 after 524 current and former female guards, nurses and others at Coleman Federal Correctional Complex, near Orlando, said they had suffered years of abuse by male colleagues and prison inmates.

An exterior shot of Coleman served as the photo for the New York Times report on federal prison abuse—the poster child for the problem. And unlike the 5-star restaurant sirloin steaks accompanying the Post and AJC articles, the image used by the Times is actually relevant to the story in question. At the very least, the Post, USA Today, AJC and NBC could have mentioned in the stories that had been fed to them by prison guard unions reps that these very same union members and their bosses had just been accused of widespread abuse and corruption. This likely would have muddied up the neat, racist contrast of underappreciated and neglected federal workers versus undeserving prisoners living it up like incarcerated Caligulas.

As one could have imagined, given the glib tenor of the pieces, not a single incarcerated person or any advocate for prison reform were quoted in any of these articles. The pieces relied entirely on prison officials and statements and press releases from prison guard union reps. Those actually being discussed—and severely belittled—aren’t even worth reaching out to for comment. They simply don’t exist. They’re a bludgeon whose humanity is tossed aside so these outlets can get cheap clickbait that’ll make Trump look bad—from the far right—for about 10 minutes. Clickbait that’ll soon be forgotten long after these guards have gotten their back pay, and the inmates in question go back to eating barely edible Nutraloaf the other 363 days a year.