The Washington Post, like a lot of corporate media (CounterSpin, 10/20/17), has spent a great deal of time hyping the bidding process for Amazon HQ2, Amazon’s planned second headquarters that hundreds of localities are allegedly competing for. The thing that distinguishes the Post’s coverage is that it and Amazon share an owner—world’s richest billionaire Jeff Bezos. So it’s notable—and uniquely sketchy—when the paper not only uses prime media real estate to uncritically hype Amazon’s primary corporate sales pitch, but does so while failing to disclose that Amazon’s CEO is the paper’s boss.

The Post’s Darla Cameron and Jonathan O’Connell (3/7/18) wrote a press release–like breakdown of the “race to land Amazon.com’s second headquarters and its 50,000 jobs,” titled “The Amazon Finalists Are Already Building Tech Economies. Which Are the Best?” The 1,100-word, graphics-heavy article didn’t include a single mention that Amazon’s boss and richest person in the world (current net worth: $130 billion) is also Cameron and O’Connell’s employer. 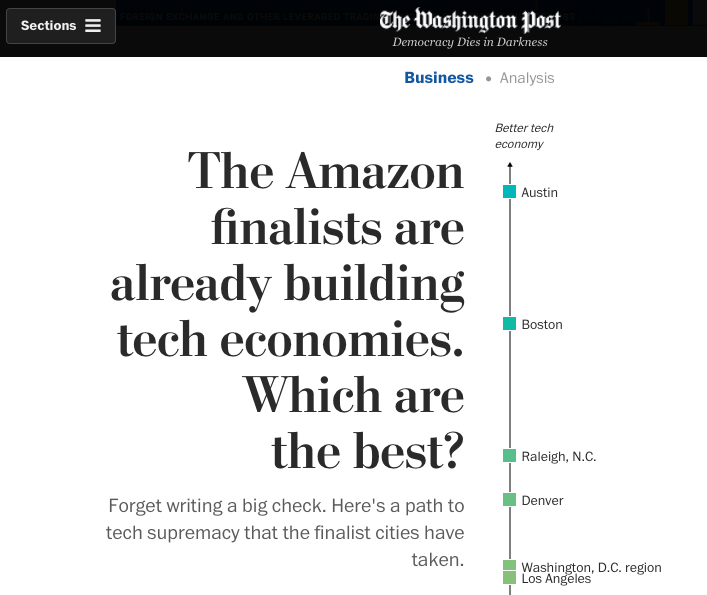 While the Washington Post‘s coverage of its corporate big brother usually throws in a perfunctory disclosure midway through its 95 percent softball coverage (FAIR.org, 7/28/17), this time editors didn’t bother.

Like last year, when FAIR (10/25/17) noted that O’Connell was simply cutting and pasting revenue figures for HQ2 from an Amazon press release, O’Connell begins the piece citing a “50,000 jobs” figure based entirely on the same Amazon press release. Like the nebulous “$30 billion to the local economy” and the “$55 billion in “spinoff benefits” Amazon HQ2 is supposed to contribute, these 50,000 jobs are a major selling point Amazon’s marketing department is throwing out, and O’Connell is uncritically reporting as fact. One can only guess where Amazon got these Sexy Large numbers, since neither it nor O’Connell bothers to cite a source. The job totals and “economic impact” of HQ2 has been repeated so many times that they are truth by sheer repetition. They just are.

O’Connell’s other recent hard-hitting coverage of Amazon’s PR effort to extract as much value as possible from local governments includes:

In fairness, O’Connell did have one article (1/31/18) expressing mild concerns about the race to the bottom entailed in the HQ2 bidding war, but he made sure to point out that the primary critic featured in the piece, Richard Florida, “admired Amazon as a company and believes some incentives for tech jobs can be a good idea.” The conflict was one of degree, not substance. 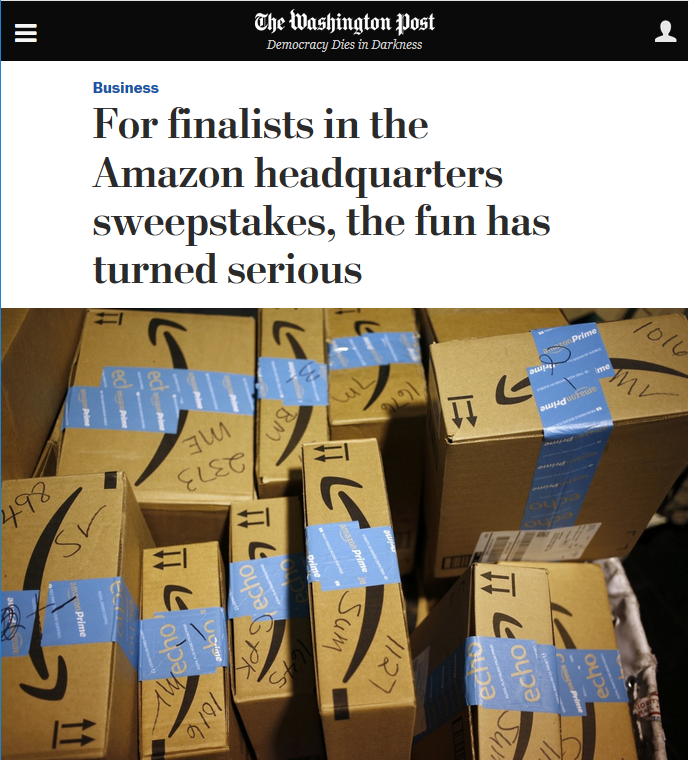 This story by Jonathan O’Connell (Washington Post, 1/26/2018) threw a reference to “Bezos, who owns the Washington Post” into the 18th paragraph.

FAIR (11/10/15) has also noted that when the Post writes puff pieces about Uber, it frequently fails to disclose that Bezos owns billions of dollars worth of stock in the car-sharing corporation.

Cameron and O’Connell’s infographic article was timed to be released with a new Brookings report about “the local value of economic development incentives.” (Spoiler alert: They’re good.) The Brookings report did little to meaningfully criticize Amazon or the broader practice of race-to-the-bottom competition for “jobs.”

The Washington Post, like most publications, repeats Amazon claims without question, props up the broader proposition—with only mild criticism around the margins—that tech investment is a boon to communities, and does little to push back at the premise that cities fighting for the privilege to serve the richest person in the world is healthy and normal. A problem in its own right, but one made even worse when it fails to clearly note that richest person in the world also happens to sign its employees’ paychecks.