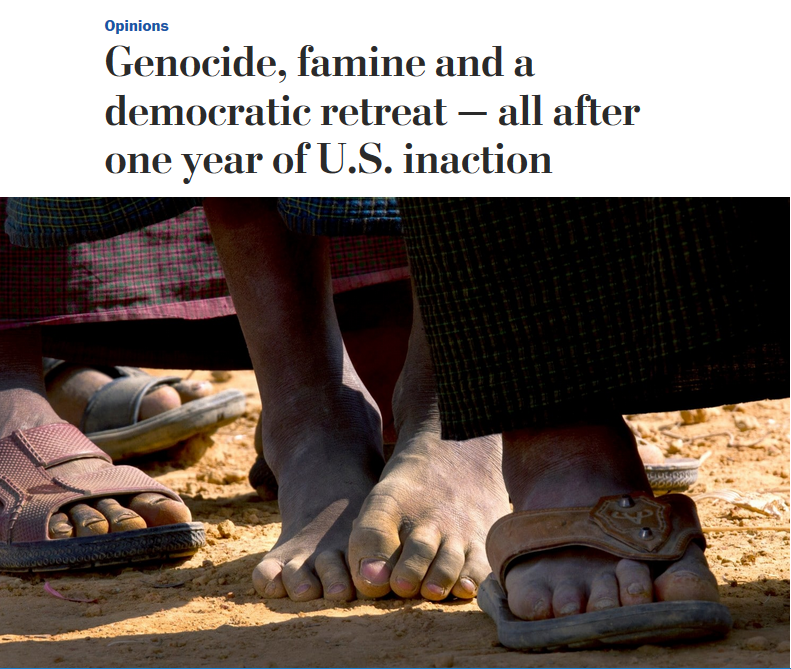 Washington Post‘s Jackson Diehl (1/21/18): “It’s getting easier for regimes to commit — and get away with — crimes against humanity.”

“American leadership” is one of a long list of vague, seemingly benign pseudo-concepts our media throw around to justify increased spending on soft power and military adventurism. It’s a difficult concept to pin down, but it’s almost always presented as something the United States is “failing” to do when it doesn’t “engage” the world with enough war, sanctions or arbitrarily applied human rights scolding.

Lamenting a “lack of American leadership” is, therefore, a time-honored Serious Person cliche for those operating at major US papers, and one Washington Post deputy editorial page editor Jackson Diehl phoned in Sunday with his op-ed “Genocide, Famine and a Democratic Retreat—All After One Year of US Inaction” (1/21/17).

The piece began with a bizarre inversion of reality:

Maybe it’s just a coincidence, but as the United States has retreated from international leadership in the past decade, several toxic global trends have gained momentum. Democracy is steadily retreating, according to Freedom House, whose annual study documents a decline for the 12th consecutive year. Famine is threatening more people than ever: Tens of millions are at risk of starvation in countries such as Yemen, South Sudan and Somalia.

It’s unclear exactly what “international leadership” is supposed to mean here, besides being inversely correlated with Bad Things happening. The piece is a broadside against both former President Obama and Donald Trump for “steadily retreating,” but the most serious Bad Thing he cites as a result of a lack of American leadership, the famine in Yemen, is a direct result of “American leadership.” Obama and Trump have logistically and politically supported the Saudi-led bombing and blockade of Yemen that caused the famine.

But Diehl’s not honestly engaging with the world as it is; his job is to advance the premise that the US has both the right and the moral duty to dictate the affairs of other countries. Diehl did the same cynical reality-inversion last June (FAIR.org, 6/26/17), when he not only ignored the US’s role in creating the Yemen famine, but painted them as the heroes coming to the rescue.

Similarly, Diehl cites “the tragedy of Syria” in Sunday’s piece as a result of a lack of American leadership, without mentioning the American leadership of the CIA—along with American leadership allies Saudi Arabia, Turkey, and Qatar—helped fund, train and arm groups in that conflict, thus fueling the “tragedy.” Also omitted was the ongoing role of “American Leadership” in bombing seven countries, its deadly drone program that has terrorized thousands of civilians in Yemen and Central Asia, its continued use of offshore penal colonies outside the scope of international law and a number of other bad things that result from the active exertion of “American leadership,” rather than its absence.

The rest of the piece is about the Trump administration’s “inaction” over ethnic cleansing of the Rohingya in Burma, but the setup is very telling. Diehl uses this ethnic catastrophe to browbeat the US for not doing enough, but really what he wants, as evidenced by his years of writing (see, e.g., FAIR.org, 5/2/06, 12/23/14, 5/17/16), is more meddling and intervention and bombing in general; the tragedy in Burma simply serves as a moral lubricant for an assertion of the US’s superiority. To national security boosters like Diehl,  “American leadership,” like military spending, is always in a state of inadequacy. There’s never enough, we always need more. The possibility that said “leadership” or military spending may be causing the problems—even the ones he himself cites as the most urgent—rather than being their solution is simply not an option.