No matter how shady a Washington swamp-dweller’s history, it can be whitewashed overnight if they happen to oppose President Donald Trump – or even serve in his administration and get fired.

For the past two years, Mira Ricardel flew under the media radar – though she worked on Trump’s transition team, and later at the Commerce Department, before coming to the White House in April as a deputy to National Security Advisor John Bolton. Everyone’s ears perked up on Tuesday, however, when First Lady Melania Trump’s office said she “no longer deserves the honor of serving in this White House.”

Because we don’t live in a democracy. We live under a dictatorship flavored with nepotism.

It’s not stunning a First Lady wants a staffer gone. That happens. What’s stunning is Melania couldn’t get it done privately, behind closed doors. She went to DEFCON 1 and forced her husband’s hand publicly. His choice is capitulation or embarrass her publicly. (More than usual.) https://t.co/YRFmHwSgsE

I’ve never been critical of the First Lady. But she has absolutely Zero Business weighing in on the fate of a top National Security official. https://t.co/mFeGMkEhax

Reports of Ricardel’s firing – which were quickly retracted – arrived amid the rampant media speculation that Trump was considering firing more Cabinet and West Wing officials, including chief of staff John Kelly, Homeland Security Secretary Kristjen Nielsen and others – all based on anonymous sources and thus impossible to verify, of course.

Bolton is reportedly fond of Ricardel, a fellow neocon who worked in the Pentagon during the George W. Bush presidency and was an aide to Bob Dole during his failed 1996 bid to unseat President Bill Clinton. Between all that and a membership in the Council on Foreign Relations, she’s as much a member of the Washington establishment as Trump isn’t. As of Tuesday evening, she remains at her White House job. 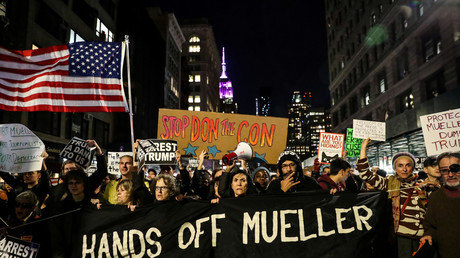 Speaking of Bush, many of the same people who once denounced him as a fascist dictator now speak fondly of the former president. After all, didn’t he atone for the Iraq War by handing Michelle Obama a cough drop at the funeral of another establishment hero, John McCain? The former Arizona senator, who was painted as the devil incarnate for running against the saintly Barack Obama in 2008, was lionized just eight years later for being a Never-Trumper. Ditto for Mitt Romney, Obama’s rival in 2012.

Hatred of Trump has united the Bush-era neocons like Bill Kristol and Clinton aides like John Podesta and Jake Sullivan, who now sit together on the board of “Alliance for Securing Democracy,” the outfit behind the notorious Hamilton68 Dashboard that sees the Kremlin’s hand behind literally every trend on social media.

But wait, there’s more! When Jeff Sessions was nominated for attorney general, the anti-Trump #Resistance painted him as an evil racist tool of the Russians, accused him of perjury before the Senate, and badgered him into recusing himself from the “Russiagate” investigation, clearing the path for Robert Mueller’s special counsel probe with an unlimited, classified scope and zero Congressional oversight.

Yet the moment Sessions tendered his resignation at Trump’s request, there were protests across the country. Admittedly, the protesters weren’t defending Sessions so much as getting hysterical about the possibility of his replacement shutting down Mueller’s probe, but the incongruity was not lost on some observers.

Watch the same Dems who voted AGAINST Jeff Sessions for AG and said he wasn’t qualified or was a “racist,” (and all other crap Dems say when they don’t have an issue) now go nuts DEFENDING Sessions. These guys have no shame.

When Trump fired FBI Director James Comey, in May 2017, the Resistance instantly forgot six months of blaming him for “robbing” Hillary Clinton of the White House – or Comey’s dubious record on civil liberties, surveillance, or FBI’s repeated failures to stop actual terrorist plots, rather than fake ones hatched by the bureau’s informants. Comey was celebrated by the media, wrote a book that sold reasonably well to the establishment, and currently virtue-signals on Twitter about voting Democrat.

We will now have a balance of power, which is a very good thing for our republic. Signs of an awakening are everywhere tonight. The giant is stirring. Do not stop speaking and living American values.

Let’s not forget Steve Bannon. The former Breitbart executive who managed Trump’s campaign for a while and served in the White House as an adviser, was accused of being a white supremacist, racist, nationalist and real mastermind behind Trump – only to be welcomed to the #Resistance, sort of, when Trump disavowed him. That, by the way, happened over Bannon’s quotes in a salacious book about the Trump White House, now long-forgotten.