Janine Jackson interviewed John Powers about voter suppression for the August 31, 2018, episode of CounterSpin. This is a lightly edited transcript. 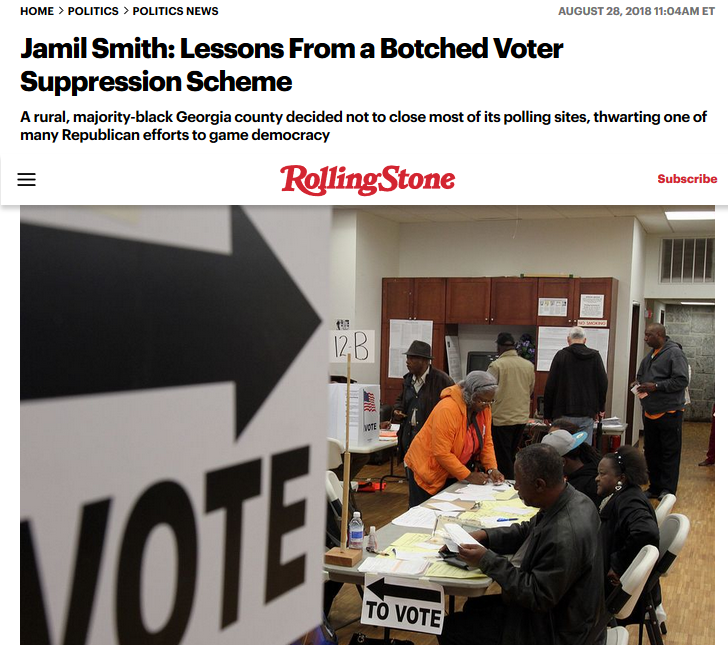 Janine Jackson: So many reporters swarmed into the town of Cuthbert, Georgia, a county attorney told Rolling Stone’s Jamil Smith, “it filled up the Econo Lodge.” The subject of the media scrum—which, it should be noted, followed community outcry—was a political consultant’s plan to shut down seven of nine polling places, in an overwhelmingly black and low-income county, on the pretense that they were inaccessible to people with disabilities, a concern he appears only to have developed after Stacey Abrams, a black woman, was nominated for governor.

The Board of Elections of Randolph County voted down the outrageous proposal. But for many, the hamfisted maneuver stands as a warning of how far—and how low—some will go when trying to suppress the votes of the black, brown and poor. With critical elections on the horizon, there’s never been greater need for scrutiny of the voting process in this country, and the efforts to disconnect it from anything like real democracy. John Powers is counsel in the Voting Rights Project at the Lawyers’ Committee for Civil Rights Under Law. He joins us now by phone from Atlanta. Welcome to CounterSpin, John Powers.

John Powers: Thank you for having me on.

JJ: Well, the Georgia shenanigans have their particulars: It wasn’t an official who tried it, but this consultant that the county brought in and has since fired, and the Board of Elections voted it down following normal procedures. It was never a done deal. But I have to believe that the outcry and the spotlight were salutary, even if it overwhelmed this town, for exposing voter suppression, which can take many different forms, can’t it? It’s not just as simple, always, as shutting down polling places.

JP: That’s right. The voting process in the United States is a lengthy one, of course. You have to register. You have to figure out what voting precinct and polling place you’re in, assuming that your registration application is actually approved by the Board of Elections. Then you have to decide to vote, either by absentee ballot or early voting in person at a location, or on Election Day. And the sad truth is that there are jurisdictions around the country that have made it more difficult for people to vote at each and every stage of that process.

JJ: I want to draw you out on one particular aspect of this. So someone who hasn’t voted in a while, because they haven’t been moved to, or because their situation meant that they couldn’t, but now they want to vote, and they find they’ve been erased from the rolls. Can you explain purges?

JP: One thing that a lot of voters aren’t aware of, with respect to their registration status, is that it’s not necessarily permanent. If someone voted, say, for former President Obama in 2008 or 2012, and hasn’t voted since then, they may no longer be on the list, even if they haven’t moved from their house since then. The Supreme Court decided in the Ohio case, Husted, that a voter can be placed in an inactive status and then ultimately removed, just for not having voted in the past number of election cycles. So voters have to remain vigilant to make sure that they are on the list, and may have to take additional steps, even though they haven’t done anything to take themselves off the list, if they haven’t voted in a while.

JJ: It seems anti-democratic on its face—you haven’t voted, so you can’t—but I understand that these purges are also flawed in practice.

JP: There’s a lot of problems with how these systems are set up. For example, a Board of Elections can flag someone to be purged if mail sent to them is returned as undeliverable by the Postal Service, or if the Board of Elections receives other information indicating that the voter may have moved, even though that’s not actually true. The Board of Elections will send you a little postcard that looks like a piece of junk mail. If you don’t fill out that piece of mail and return it, the Board of Elections takes that as you admitting that you no longer reside at that jurisdiction, and then you can be removed within a couple of election cycles. And most people don’t realize that notice means that, and therefore they don’t fill it out, which is why so many folks get removed improperly on the basis that they moved. 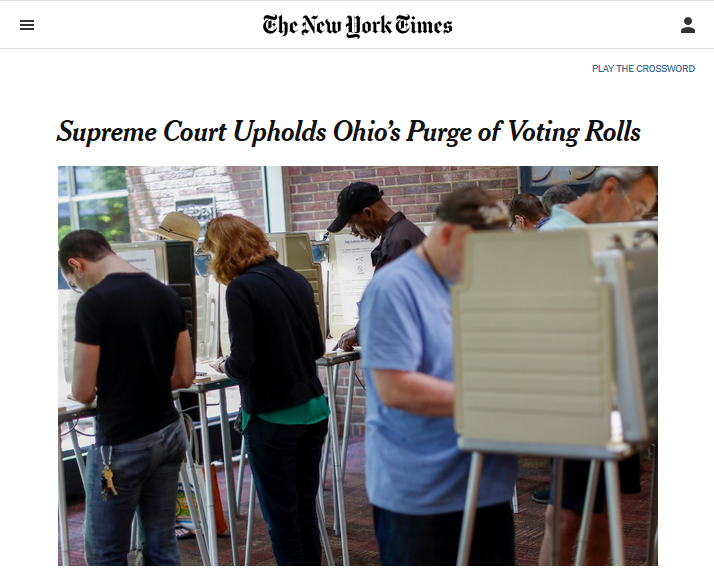 JJ: I understand that these purges are increasing lately; I think there’s new research from Brennan that suggests that. Can you explain briefly what things like this have to do with Shelby County v. Holder, the 2013 Supreme Court decision; a lot of this is connected, one way or another, with that ruling, isn’t it?

JP: It is. In 2013, the Supreme Court rendered an extremely important opinion in Shelby County v. Holder, which lifted many jurisdictions across the country from having to submit changes to their voting practices and procedures for what was called pre-clearance, or review by the Department of Justice. And that pre-clearance process forced jurisdictions to be really careful about the voting changes they enacted and submitted for review, because they were prohibited from adopting changes that either had a discriminatory effect on minority voters, or were adopted for the purpose of making it more difficult for minority voters to cast a ballot.

And what we’ve seen since the Shelby County v. Holder decision is that jurisdictions no longer being monitored, and having to submit things for review, have said, “OK, now we’re free, we can do whatever we want,” and that places an extreme burden on local voters and nonprofits to challenge things at the local level, and if necessary bring lawsuits. Meaning that things that before could have easily been stopped in their tracks by DoJ at the outset now get through, and it requires—you know, for example, in Georgia there are 159 counties—it’s hard for community activists to stay engaged and fight in every single county in a state, let alone the entire country.

JJ: And I would just point out, states weren’t chosen randomly to have to pre-clear their election laws. They were particularly those places that had a history of racial discrimination, right?

JP: That’s exactly right. The states subject to Section 5 pre-clearance had been chosen for that specifically because they had a track record of discrimination, leading to the passage of the Voting Rights Act of 1965 in the first place. And what we’ve seen is that since Shelby County, it is these states where we’ve seen the number of problematic voting changes increase rapidly in recent years. You could go through a laundry list of voting precinct consolidations, purges of voters, enacting very draconian exact-match registration requirements—where people get booted off the rolls for having a hyphen in their voter registration application but not on their driver’s license—as well as proof-of-citizenship requirements. There’s a number of different barriers that have been erected that make it more difficult for minority voters to have an equal say in the political process.

JJ: Let me read you a quote. The New York Times, in reporting on the Supreme Court’s upholding of the Ohio Republicans’ plans on purging, the Times called it

a vivid reminder that measures placing obstacles between people seeking to vote and their ability to cast ballots, including cutbacks on early voting, elimination of same-day registration and tough voter ID laws, present dueling visions of democracy. Republicans have pushed for such restrictions, arguing without evidence that they are needed to combat what they say is widespread voter fraud. Democrats have pushed back, countering that efforts are part of an attempt to suppress voting by Democratic constituencies, particularly minorities.

Corporate media have been, I think, increasingly willing to say, as the Times does here, that claims of voter fraud are unsubstantiated. But to present the idea that they represent voter suppression as a counter to that, as if it were equally groundless and partisan, to call them “dueling visions,” I think is journalistic malpractice, frankly. What are your thoughts, finally, on what responsible reporting on voting, on these important voting issues, would include? What would you like to see from media? 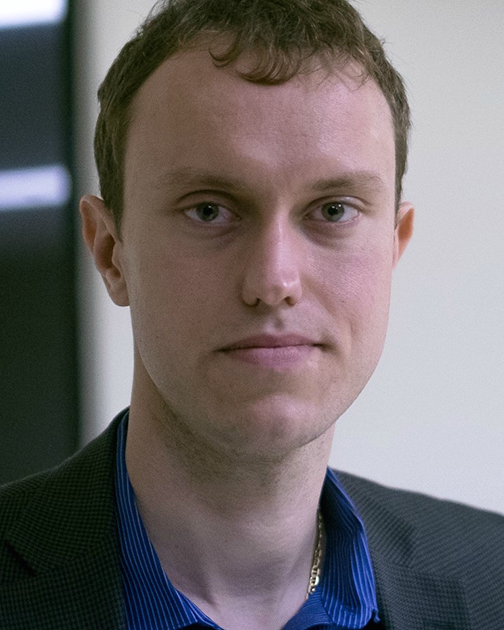 John Powers: “The simple fact is that jurisdictions that have wanted to disenfranchise voters have been raising the specter of voter fraud for more than 100 years now.” (photo: John Lee Fisher)

JP: That’s a very good question. You’re absolutely correct that the media has played a game of false equivalence when it comes to reporting on the battle for voting rights in America. The simple fact is that jurisdictions that have wanted to disenfranchise voters have been raising the specter of voter fraud for more than 100 years now. Tools like the literacy test, grandfather clauses, poll taxes, were justified on the grounds of protecting the integrity of the ballot box and preventing voter fraud, and these rationales are just as specious now as they were back then.

There’ve been exhaustive studies in Texas and Georgia and North Carolina, where government officials have spent large numbers of taxpayer dollars hunting for voter fraud, and they simply can’t find it. You either see no criminal charges or convictions whatsoever, or the criminalization of innocent behavior, in which poor voters, who are not aware of the significance of their actions, end of getting prosecuted for making innocent mistakes. So that’s what you have on one side of the ledger.

On the other side, you see the enactment of legislation and pursuing practices—whether it’s strict voter ID, proof-of-citizenship requirements, exact-match voter registration verification procedures, the use of Crosscheck between the various states, reducing the number of early voting locations and Election Day polling locations—a whole panoply of practices that have had tangible, measurable effects in terms of reducing the number of people who have been able to participate in the political process.

And, of course, creating these burdens has the most significant impact on our country’s most vulnerable citizens, who happen to generally be those from a lower socioeconomic status and education level and income level, and who have greater burdens in their lives that make it more difficult to jump through the extra hoops that have been placed in front of them. And to say that the thousands of voters who have been disenfranchised—or, when it comes to gerrymandering and redistricting, whose actual votes mean less, because they’ve been placed into cracked or packed districts—to put that on an equal footing with so-called ballot integrity in preventing voter fraud is a grievous mistake, and hopefully going forward, the media will look at the hard science and data, and be more willing to call out attempts at voter suppression for what they really are.

JJ: We’ve been speaking with John Powers, counsel in the Voting Rights Project at the Lawyers’ Committee for Civil Rights Under Law. You can find their work online at LawyersCommittee.org. John Powers, thank you so much for joining us this week on CounterSpin.

JP: Thank you for having me.