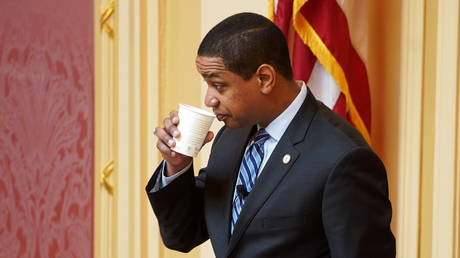 Meredith Watson claims she was raped by Fairfax in a “premeditated and aggressive assault” while both were students at Duke University back in 2000. Watson told multiple friends and classmates about the assault after it happened – both verbally and in Facebook messages and emails, she has revealed through her attorney. At least one of those friends has publicly corroborated her account, while others have reportedly provided statements.

Watson says she doesn’t want any money from Fairfax – she just wants him to resign.

Says there is a “smear campaign” being run against him.

And concludes: “I will not resign”

The two undergrads were “friends” at Duke but did not date or see each other romantically, according to Watson’s lawyer, Nancy Erika Smith.

Also on rt.com
‘Don’t want to get into that’: Democrats’ #MeToo double standard on Kavanaugh and Fairfax


“At this time, Ms. Watson is reluctantly coming forward out of a strong sense of civic duty and her belief that those seeking or serving in public office should be of the highest character,” said Smith, who claims the details of the attack on Watson are similar to the details shared by Vanessa Tyson, the professor who accused Fairfax last week.

Fairfax has denied Watson’s allegations, claiming there is a “smear campaign” targeting him. “I will not resign,” he said in a statement, calling for a full investigation and noting he has already passed FBI background checks.


The Lieutenant Governor also insisted there was nothing non-consensual about his encounter with Tyson, who released a statement claiming she initially suppressed memories of the assault – in which the Democratic politician allegedly forced her to perform oral sex – out of shame until the news he was running for office “hit [her] like a ton of bricks.”

With this second serious and credible allegation of sexual assault, Justin Fairfax should resign. This is not a partisan issue.

And I believe Lieutenant Governor Justin Fairfax must resign.

The multiple detailed allegations against the Lt. Gov. of Virginia are deeply troubling. They are serious, credible, and corroborated by others. It is no longer appropriate for him to serve. He should resign.

The allegations against Justin Fairfax are serious and credible. It is clear to me that he can no longer effectively serve the people of Virginia as Lieutenant Governor. I call for his immediate resignation.

Fairfax isn’t the only VA Democrat in hot water, as the entire state leadership is crumbling under allegations of racism and sexual assault. After first admitting, then denying he had appeared in a photo from his high school yearbook depicting a man in blackface next to a man in a KKK costume, Governor Ralph Northam has refused to step down despite calls for his resignation. Meanwhile, Attorney General Mark Herring has admitted that he too wore blackface at a college party.