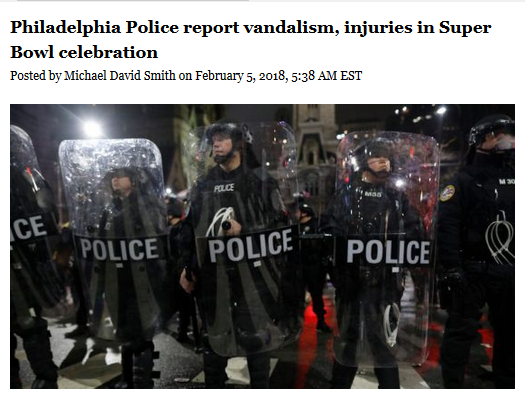 After the Philadelphia Eagles mounted an exciting and improbable underdog victory over the New England Patriots on Super Bowl Sunday, Philly fans poured into the city’s streets to celebrate. Fires were set, some stores were broken into, and drunk people fought and caroused across the city. Crowds of (overwhelmingly) white male fans climbed poles, leapt off of building awnings, uprooted lamp posts and generally caused mayhem and havoc across the City of Brotherly Love. The celebration ended Monday morning with only four arrests, and with what NBC Sports (2/5/18) described vaguely as “vandalism and injuries.”

The muted reaction from city officials to the unrest was noted by a number of media outlets on Monday morning. Newsweek (2/5/18) noted “the difference in how the public and officials reacted to riots by fans compared to those prompted by civil unrest.” New York Daily News columnist Evan Grossman (2/5/18) asked:

Why it is socially acceptable, why is it encouraged by public officials, to go completely bonkers and break stuff after a big win, but when non-violent crowds form in a common bond over social issues that matter, like police brutality and racial injustice, they are met with devastating force in riot gear, assault rifles and intimidation?

Citing “clear racial bias in the response of city officials,” Alternet‘s Liz Posner (2/5/18) also called out the media, noting that “riots following major sports events are generally reported with humor and exasperation, while those triggered by police shootings are used as an excuse to pathologize the Black Lives Matter movement and the black community.” 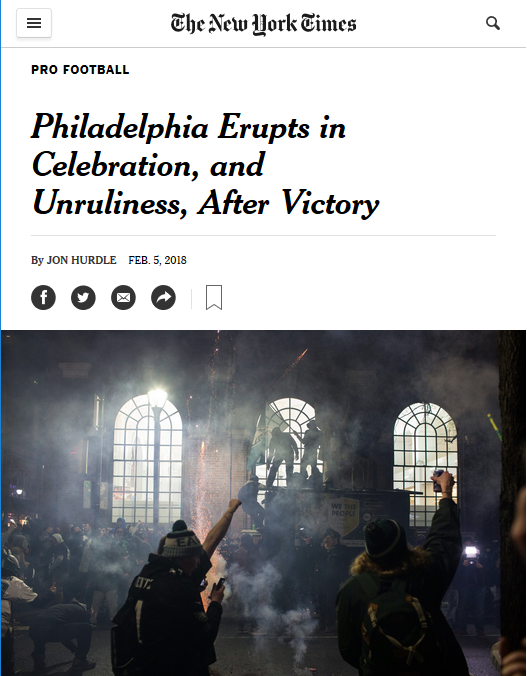 The New York Times (2/5/18) describes as “unruliness” what in a protest context it would call a “violent crowd.”

A FAIR review of media reporting on the Philadelphia riots found that observations like these were the exceptions to the rule. Despite the fact that the property destruction in the aftermath of Sunday night’s unrest was similar in scope to the damage caused by protests against police killings of young black men over the past three years, only the latter is regularly called “violence.”

The New York Times February 5 headline, for example, was “Philadelphia Erupts in Celebration, and Unruliness, After Victory.” But in 2016, the Grey Lady (8/14/16) described “a night of violence” in Milwaukee after a police shooting of an unarmed black man sparked angry protests, in a piece originally headlined “Violent Crowd Confronts Police in Milwaukee After Fatal Shooting.”

The St. Louis protests were also described as “violent” by AP (9/17/17), whose reporter described a grim scene in which protesters “refused to disperse” and broke windows. The same kind of behavior in Philadelphia was couched in far different language when AP (2/5/18) reported on the Eagles win, where city officials “had some cleaning up to do” after fans “turned unruly overnight.” “Smashing department store windows, looting a gas station convenience store” and hitting cops with bottles were described as the actions of “rowdies.”

Philadelphia’s NBC10 (9/16/17) posted the AP story on St. Louis, amplifying its focus on a “spasm of violence.”  By contrast, the local channel had one reference to Philly’s post–Super Bowl chaos on the site’s homepage on Monday night (2/5/18): a video entitled “Philadelphia Happy After Eagles Super Bowl Victory.”

Media describing property destruction as “violence” in some situations and not others is not new, of course. It’s often overlooked, in today’s remembrances of Martin Luther King, Jr., that his movement was frequently blamed for the property destruction  that sometimes accompanied protests. In recent years, corporate media coverage of Black Lives Matter protests has presented property damage as “violence,” pushing a narrative that posits the movement as a fundamentally destructive force in American life. 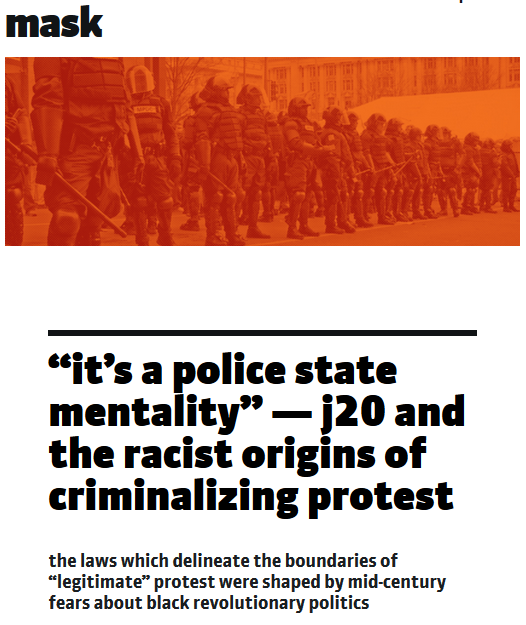 Mask (11/13/17): “The state maintains its monopoly on the legitimate use of force by policing the definition of violence.”

But the reason for the variance may have as much to do with the motive for the protest as with the racial makeup of the people in the street. Majority white crowds at the WTO protests in Seattle in 2000 and the J20 protests at the 2016 Trump inauguration in Washington, DC, were each painted by corporate media as “violent” events based on limited incidents of vandalism.

Reporter Sam Adler-Bell (Mask, 11/13/17), in a piece on the J20 arrests, noted the different application of the “violent” label depending on whether actions challenge the established order or not:

Riots around sporting events, like Philadelphia’s vandalous celebrations on Sunday night and Monday morning, though costly and sometimes even life-threatening, pose no challenge to the status quo. And so corporate media, embedded in the established order, feel little need to harshly condemn what they generally present as a good time taken too far.