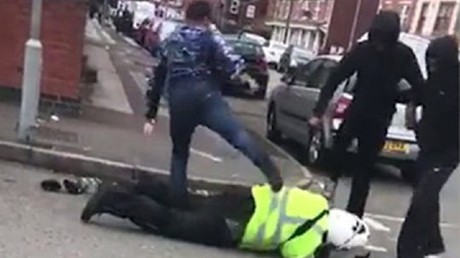 In an attempt to counter the sharp rise in violent crime in Birmingham, 550 people have joined a vigilante patrol in the UK’s second largest city, having lost trust in the police force.

The Facebook group, ‘We Stand Determined’, was formed by three local people after discovering a friend of theirs had been viciously attacked in his home by hammer-wielding intruders.

Organisers Wayne, Tracy and Michael, who have not revealed their full names, are urging all their recent recruits and the wider community to report any dangers and threats they see, day or night, the Metro reports.

The group run twice-weekly patrols across the city of Birmingham, and insist, despite the vigilante label, they use non-violent tactics, claiming they want to work in partnership with local police and not against them.

Wayne, 47, who is a college lecturer, argues that crime is getting out of hand in his area, having seen a recent spike in crime in Birmingham and the affluent West Midlands town of Solihull.

He said: “There has been a recent spate of crime in Birmingham recently and Solihull in particular has fallen victim to an increase of just under 1,500 more cases so far this year.

On Wednesday, West Midlands Police released a harrowing video of a gang of seven men kicking, punching and hacking a man on the floor with a machete.

It follows a spate of stabbings, shootings and murders in Birmingham. While the so-called ‘Corsa Cannibals’, known for stripping down Vauxhall Corsa cars to sell for parts, are blighting the city, according to the Metro.

A spokesperson for West Midlands Police said officers were aware of a number of groups but advised community members to join police-approved Streetwatch programmes instead.

The group, which has denounced the government for overseeing a reduction in police numbers by 20,000 officers since 2010, has also posted many reports of stolen cars and violent incidents.