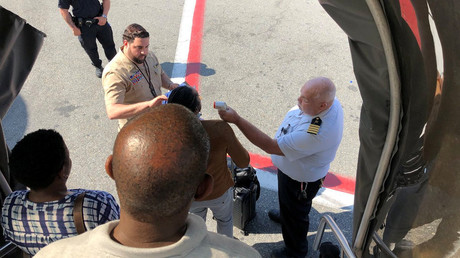 Videos from inside an Emirates plane quarantined at JFK airport with 500 passengers on board show confusion among the travellers, with one of the eyewitness describing the aircraft as a “flying infirmary.”

Emirates Flight 203 landed Wednesday morning, after the pilot noticed passengers coughing and exhibiting symptoms of fever. The plane has since been parked in a staging area at the airport, as emergency response teams check passengers and investigate the cause of the illness.

Video footage from inside shows confusion on board the plane, as officials try to clear the aisles and keep passengers in their seats. One passenger, Erin Sykes, said that many people on board seemed sick before the flight even took off. She described the plane as “basically a flying infirmary,” and added that she asked cabin crew for a mask before the 14-hour flight, so she wouldn’t become sick herself.

As passenges slowly disembarked the plane, emergency personnel checked their temperatures, looking for signs of sickness.

New York Port Authority police and officials from the Centers for Disease Control and Prevention are monitoring the situation, as is the NYPD’s Counterterrorism Bureau. Reports from the ground indicate the mystery illness may be food-related, although some passengers, like Sykes, dispute this.