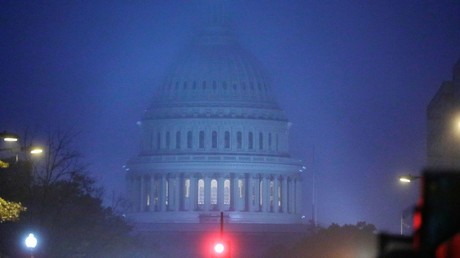 Embarrassing social media photos could easily sink a congressional campaign, but several lawmakers have shown that you can be charged with corruption and embezzlement and still win re-election.

American voters took partisan politics to a whole new level on Tuesday, after Republican congressmen Duncan Hunter and Chris Collins – both of whom face federal indictments for crimes including embezzlement and securities fraud – won re-election. As long as the Democrats don’t win, right?

Another big takeaway tonight: Being under federal indictment is no bar to winning re-election! Just ask Chris Collins and Duncan Hunter. #Midterms2018

Hunter, a five-term congressman from California, was charged along with his wife in August of misusing campaign funds totaling more than $250,000.

The Hunter household found remarkably creative ways to spend the embezzled cash – even using the funds to purchase a $600 airline ticket for their pet rabbit. The congressman also used the money to reportedly carry out extramarital affairs and to take vacations to Hawaii, London, and Las Vegas. On top of that – he put the blame on his wife.

The 60-count indictment includes allegations of conspiracy, wire fraud, and falsification of records.

Hunter’s electoral success can be attributed to a number of factors. For starters, the politician enjoys a peculiar kind of name recognition: Hunter’s father, also named Duncan, held the House seat for 28 years before him. The legacy congressman also employed some below-the-belt attacks against his opponent, Democrat Ammar Campa-Najjar. Hunter’s campaign even suggested that Campa-Najjar, who is a Latino Arab-American, was a security risk because of alleged family links to terrorism.

Hey, CA’s 50th congressional district: you are aware that the man you re-elected, Duncan Hunter, was INDICTED over the summer for misuse of campaign funds, right? FEDERAL INDICTMENT. pic.twitter.com/JUmnLUO9ax

Collins, who represents New York’s 27th District, was also indicted in August – but his charges are not quite as entertaining. The three-term incumbent is accused of insider trading. Prosecutors claim that the Republican congressman tipped off his son about a failed drug trial by the Australian pharmaceuticals company Innate Immunotherapeutics. Collins was serving on the company’s board at the time. His son then allegedly sold his shares before news of the drug trial sent the price of the stock into freefall. Collins suspended his campaign in August after being arrested. He re-launched his campaign in mid-September after the Republican Party failed to replace him on the ballot. He defeated his Democratic opponent, Nate McMurray, by about one percent.

The New York congressman may be a crook, but apparently he has a political crystal ball: He was the first House member to endorse the presidential candidacy of Donald Trump.

Republicans weren’t the only ones to cash in big on the mindless Red vs. Blue paradigm, however. Voters appeared to be equally forgiving on the other side of the aisle. Democratic Sen. Bob Menendez, who represents New Jersey, was victorious in Tuesday’s elections despite being charged with corruption in 2017. The Justice Department eventually dropped the case.

This is a country where indicted Chris Collins & Duncan Hunter get elected, but Beto O’Rourke & Andrew Gillum don’t.

Something really sad about that.#ElectionNight

Even though polls showed that voters didn’t think Menendez was trustworthy, they nonetheless held their noses and gave him another term.

“They apparently valued sending a Democrat to the Senate to stand up to President Donald Trump and Republicans more,” Vox noted.