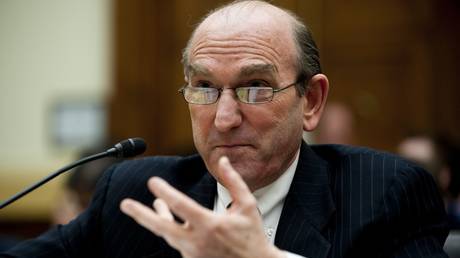 Intercepted by RT America correspondent Dan Cohen while leaving a conference in DC, US envoy for Venezuela Elliott Abrams did not seem in the mood to discuss his criminal convictions or Iran-Contra weapons shipments.

Cohen confronted Abrams, recently appointed point man for the US effort to oust the elected government in Caracas, as he exited a conference on the humanitarian crisis in Venezuela hosted by the Organization for American States (OAS) in Washington, DC. The former Reagan official, who played a key role in securing US support for death squads in Central America during the 1980s, was not in the mood to chat about his past exploits, however.

“What do you say to people who are skeptical about you because of your history of using humanitarian aid to send weapons to contras in Central America? Do you have any comment about that?” Cohen asked Abrams as he walked out the conference with a female colleague.

VIDEO: Elliott Abrams threatened me after I caught him slipping out of the OAS conference on Venezuela and asked him about his history of lying to Congress and sending weapons to contras in Central America. pic.twitter.com/gydD958cCM

Clearly unnerved by the line of questioning, Abrams asked Cohen to “leave us alone, please.”

Undeterred, Cohen kept his camera rolling. “I’m doing my job, you are too,” he shot back.

As the RT America journalist walked alongside the pair, he asked a follow-up question: “What do you have to say about your criminal convictions for lying to Congress? The people want to know why you see yourself as qualified for this. You lied to Congress. You’re convicted of crimes.”

Abrams refused to answer, instead claiming that Cohen was “harassing” him.

“You know, you’re going to have to leave us alone, or we’ll actually have to have…” he said, without finishing his thought. Cohen noted that he had every right to walk down the public sidewalk.

Eventually Cohen gave up the pursuit and returned to covering the Venezuela conference, but expressed hope that he would cross paths with Abrams again.

Several journalists on social media praised Cohen’s efforts, many pointing out that the US media has largely avoided confronting Abrams about his shady past.

Cohen had succeeding questioning Abrams “in an adversarial way that no US cable news outlet would ever dare,” said Aaron Maté.

Side note: for all the talk I hear about RT as integral part of Putin’s pro-Trump influence campaign (see Jan 2017 intel report), here’s RT’s @dancohen3000 questioning Trump’s Venezuela regime change envoy in an adversarial way that no US cable news outlet would ever dare: https://t.co/5VhGOVjZGK

“Keep doing a great job! Constant media exposure and articles will have Congress questioning him again,” wrote one admirer on Twitter.

Keep doing a great job! Constant media exposure and articles will have Congress questioning him again. And send the tape to the Judiciary Committee on Foreign Affairs or some other Committee.

“This is why we need Real Journalists and Alternative Media! The Corporate War Mongering Media would never hold these people accountable!” another netizen commented.

This is why we need Real Journalists and Alternative Media!!! The Corporate War Mongering Media would never hold these people accountable!

As the Reagan administration’s assistant secretary of state for human rights in the 1980s, Abrams provided material support to US-backed dictators in Guatemala, El Salvador and Honduras. His work included covertly arming the anti-government guerrillas in Nicaragua, which came to be known as the Iran-Contra scandal. Some of the weapons shipments were labeled as “humanitarian aid.”

Abrams was eventually convicted of lying to Congress about Iran-Contra, but was pardoned immediately by President George H.W. Bush. In the 1990s, Abrams became a founding member of the Project for a New American Century, the hawkish neoconservative think tank that urged Washington to create a “benevolent global hegemony” backed by military might.


Earlier this week, Congresswoman Ilhan Omar (D-Minnesota) confronted Abrams about the war crimes that he enabled in Central America. He refused to answer her questions, denouncing them as “personal attacks.”