Under a new bill introduced on Capitol Hill, the federal government would pay the Navajo Nation nearly $200 million for water projects, with another $8 million coming from Utah, as part of a deal to end more than a decade of contention over water rights.

Senator Orrin Hatch (R-Utah) introduced the bill on Thursday, with Representative Jason Chaffetz (R-Utah) filing companion legislation in the House. Senate Bill 664 would authorize the US government to spend up to $198.3 million for Navajo water projects like wells, pipelines and treatment plants.

“I’m thrilled that over a decade of work with our Navajo friends and neighbors has culminated in this fair, equitable settlement that benefits all water users in the region,” Hatch said in a statement. “This result took a great deal of time and commitment, and I’m grateful so many willing partners stepped up to the plate to address this complex issue.”

The Navajo Nation possesses extensive “aboriginal, historic, appropriative and reserved rights to the use of all the water necessary” to make its reservation land livable, but those water rights are “largely unquantified,” according to the Navajo Nation Water Rights Commission. The Navajo Nation is located almost entirely within the Colorado River Basin in the Four Corners states of Arizona, Colorado, New Mexico and Utah.

The deal gives the Navajo Nation 81,500 acre-feet per year (AFY) of Utah’s unused share of water on the San Juan River, which empties into the Colorado near Glen Canyon. That will support about 300,000 people annually, far more than the reservation’s population of nearly 175,000, according to the 2010 US Census. Fewer than 6,000 Navajo live in the part of the reservation that is in Utah. 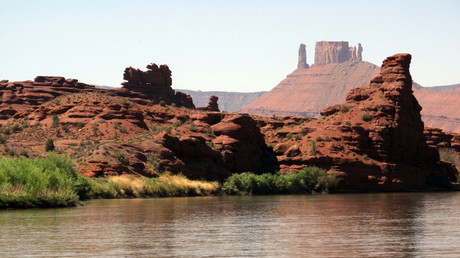 The settlement, which was initially announced last January, drew protests that it was a “bad water deal” that was rushed through the Navajo Nation Council by a non-Indian water rights attorney, according to Navajo activist Ed Becenti. The lawyer, Stanley Pollack, has been employed by the Navajo Nation since the 1980s.

Conservation groups were alarmed that the deal includes a waiver of any past legal claims against Utah and the US, even though such a provision is standard in water agreements between Native American tribes and the US government, according to the Indian Country Media Network (ICMN).

“It kind of tells me that the state of Utah understands that there’s no water left for the tribes,” John Weisheit, conservation director for Living Rivers, a Utah-based water advocacy group, told ICMN last July. “They’re first in rights, but last in line for water.”

An advising attorney for the Navajo Nation, Daniel Cordalis, who is Navajo, pointed out that the situation is more nuanced than that, as the water rights deal with the San Juan River, not the Colorado. The agreement allows the Navajo Nation to draw water from aquifers, the San Juan, and its tributaries, as well as the ability to divert water from Lake Powell, though the tribe does not currently have plans to do so.

“The San Juan River is not burdened with downstream water rights such that those existing water rights present a significant detriment to Navajo’s 81,500 acre-feet a year (AFY) right,” he said. “In our opinion, there will be enough water in the San Juan River to achieve the full settlement value on a yearly basis.”

“What the settlement does is provide that flexibility for tribal members to both use water now and have enough water for future development, which ultimately is most important,” Cordalis added.

Last January, the Navajo Nation Council quickly approved the water rights agreement with a 13-7 vote after it was announced. By July, all seven Navajo chapters in Utah had also signed on, and Navajo Nation President Russell Begaye gave the agreement a tentative stamp of approval. On Thursday, Begaye said the deal “represents a win-win for the Navajo Nation and the State of Utah,” and called on Congress to pass “this historic legislation.”

The agreement also allows for economic development and for leasing water to off-reservation entities, and Navajo communities in the Beehive State won’t lose any water they don’t use.

“Water is the lifeblood of the West. With Navajo water rights finally quantified, they can now benefit economically from a resource that is rightfully theirs,” Chaffetz said. “The water infrastructure that will be built as a result of this agreement is long overdue. This pact provides tangible benefits that improve the quality of life for Utah Navajo.”