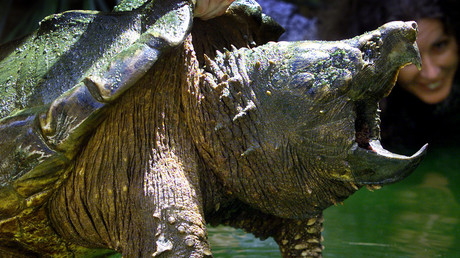 A science teacher in Idaho, who fed a sick puppy to a turtle in front of his students, has been accused of animal cruelty and faces a possible six-month prison sentence, as well as a fine of $5,000, if found guilty of misdemeanor.

Robert Crosland of Preston Junior High School was charged on Friday, after an investigation by the Idaho attorney general’s office. The school authorities said they’re waiting for the verdict of the judges to decide on the teacher’s future.

In early March, Crosland gathered a small group of students for a science ‘experiment’ after classes, during which he fed a sick puppy to a huge snapping turtle in front of them. The incident caused a huge public outcry and a petition, which labeled the teacher’s actions “disgusting” and urged him to be fired, was launched online and quickly gathered the goal of 190,000 signatures.

The school insisted that the experiment was “not a part of any school-directed program”, while the turtle was seized by the Idaho State Department of Agriculture and “humanely euthanized,” as it is viewed as an invasive species by state authorities.

PETA’s senior director of cruelty casework, Stephanie Bell, blasted the teacher, saying that “any youngster who witnessed cruelty in the classroom is now in desperate need of lessons about having empathy for other living beings.”

Former students told the East Idaho News that Crosland previously fed guinea pigs to snakes and snapping turtles during classes. However, his former wards defended their teacher, with one of them insisting that “he really brought science to life. I loved his class because he had turtles and snakes and other cool things.”

The mother of two of Crosland’s current students, Farahlyn Hansen, told the Preston Citizen that her kids were “very upset about the way Robert is being portrayed in the news.”

“The puppy was dying. I felt like it was the more humane thing for Robert to do than to just leave it… He’s spent his whole life showing kids how to care for and feed animals,” Hansen said.

The news of Crosland being charged was welcomed by many animal lovers online, who demanded the strictest punishment for the science teacher. It’s not clear if Crosland is still teaching classes in Preston, but an anonymous employee was put on administrative leave by the local board of education on 21 March.

#robertcrosland There are some real sickos in this world. Any students that think this is ok, Your not ok. Something wrong deep inside. Your a cruel piece of crap.

“We hope that any errors in judgement made by a teacher in this instance will not cause us to forget the years of care, effort, and passion the teacher has given to students in Preston School District,” Marc Gee, superintendent for the local school district, said.