Washington has frozen a $125 million payment to the United Nations Relief and Works Agency that was scheduled for January 1, according to a report citing unnamed diplomats. UNRWA provides aid to Palestinian refugees.

Citing “three Western diplomats,” Israeli Channel Ten diplomatic correspondent Barak Ravid reported the freeze on Friday at Axios. The diplomats reportedly said that the funding is being frozen until the Trump administration finishes a review of US aid to the Palestinian Authority. 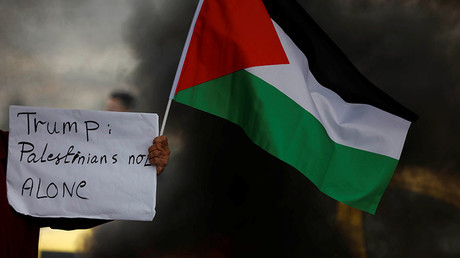 On Tuesday, US President Donald Trump tweeted he was considering halting payments to the PA. The sentiments were echoed by the US envoy to the UN, Nikki Haley.

“But with the Palestinians no longer willing to talk peace, why should we make any of these massive future payments to them?” Trump wrote.

The frozen amount represents more than a third of the $300 million the US contributes to UNRWA annually. Haley threatened to withhold the funds last week, after Palestinian President Mahmoud Abbas rejected Trump’s move to recognize Jerusalem as the capital of Israel.

Just because the funds were not transferred does not mean they were frozen, Ravid quotes a State Department official as saying. “There are still deliberations taking place, and we have until mid January to decide what we are going to do.”

Shuttering the UNRWA, which is already facing budget shortages, would leave millions of Palestinian refugees inside Israeli-controlled borders without their basic needs met. Destabilization could spark a popular uprising and potential armed conflict with Hamas, the militant group that rules the Gaza Strip.

Palestinian negotiator Saeb Erekat Trump is “threatening to starve Palestinian children in refugee camps and deny their natural rights to health and education if we don’t endorse his terms and dictations.”

On Friday, Israeli Prime Minister Benjamin Netanyahu publicly supported Trump’s “critical attitude towards UNRWA,” according to statement from his office.

Privately, however, Netanyahu urged Trump not to enact the cuts, according to the Times of Israel. That assessment is shared by the Israeli security establishment and the Coordinator of Government Activities in the Territories (COGAT) – the Israeli body that administers the West Bank and Gaza – according to Ravid’s report. A senior Israeli official told him that the “humanitarian situation in Gaza is complicated enough and harming UNRWA funding will only make it more complicated.”

UNRWA was set up in 1949, following the establishment of the state of Israel. The agency provides education, social services and healthcare to more than 5 million Palestinian refugees.