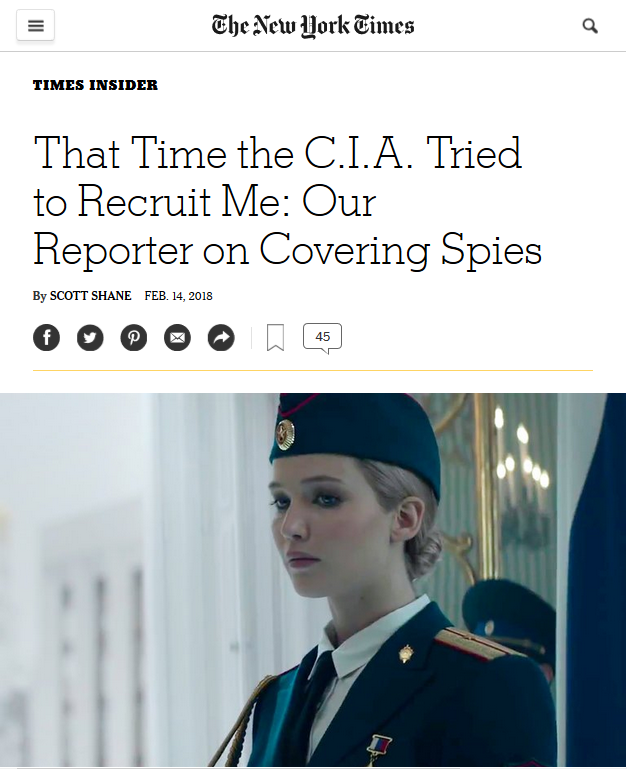 As part of a promotion for the upcoming “Look, Evil Russians!” film Red Sparrow (hyping Hollywood films is apparently a thing reporters do now), New York Times national security reporter Scott Shane (2/14/18) wrote a synergistic Cold War 2.0 essay about the CIA’s alleged attempt to recruit him. It included a rather jarring—if not risible—paragraph summarizing Shane’s years of reporting:

All these years later, I assume my name appears in multiple files at the CIA, the National Security Agency and perhaps other corners of the sprawling security bureaucracy, with gripes and comments related to my coverage of how America stumbled into torture; how drone strikes went wrong; espionage cases; WikiLeaks cables; Snowden documents; Russian hackers and the Shadow Brokers; and probably stories I’ve forgotten.

Two clauses stand out for their confident attribution of benevolent motives to US foreign policy. First, there’s the idea that “America stumbled into torture,” rather than planned, plotted and spent over 15 years carrying out a policy of torture. This pretends that the US’s massive global torture regime—which involved drownings, beatings, sleep deprivation and sexual humiliation, among other techniques, along with “extraordinary rendition” to allied countries for less refined torture methods–was something other than a deliberate policy initiative.

As FAIR (6/22/17) noted last year, corporate media routinely assert that the US “stumbles,” “slips” or is “dragged into” war and other forms of organized violence, rather than planning deliberate acts of aggression. For reporters in foreign policy circles, the US only does immoral things on accident—unlike Official Bad Countries, which do them for calculated gain when they aren’t motivated by sheer malice.

The second clause, claiming that “drone strikes went wrong,” is a passive way of suggesting that civilian deaths are an unforeseen accident rather than a predictable consequence baked into the cake of the US’s permawar on terror. The US doesn’t murder civilians, it simply launches missiles at unknown and faceless brown people in Yemen and Afghanistan, and sometimes the missiles “go wrong.” While Shane has certainly reported on these respective crimes (as he proudly notes), he has done so in a similar, limited fashion that treats them as unfortunate mishaps, rather than intentional features of a violent empire.

For an essay that is more or less Shane patting himself on the back for holding power to account instead of becoming a spook, his instinct to assume noble intentions on the part of these spooks is a telling indication of the broader ethos of corporate media’s national security reporting: Criticism is welcome around the margins, so long as motives are never challenged.