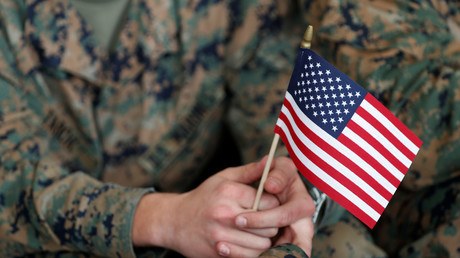 The US war in Afghanistan was built on a “profitable lie” and the “state terror” perpetuated by Washington in its foreign wars has little to do with protecting and defending Americans, a former US marine has written.

There is a “chasm of awareness” that exists between American veterans and civilians who don’t know what war is really like, former marine Lyle Jeremy Rubin wrote in The Nation. Rubin said that he used to “believe every word” from Bush-era officials after the September 11 terror attacks, but that he had begun to start questioning the war even before he was deployed in 2010.

“Most Americans, when they talk about thanking troops for their service, I think they have this idea that we’re defending the country…the fact is that what many of us are doing…we’re terrorizing desperate populations” – Former Marine Lyle Jeremy Rubin https://t.co/V7H2Wsudsu

The former marine took aim at liberal media for cheering on US military adventurism and for failing to properly cover wars which cause “needless destruction” and death. In particular, he said that “celebrated commentators” like MSNBC’s Rachel Maddow and Lawrence O’Donnell “fail to cover America’s ongoing wars and the role some of their favorite guests have played in launching and expanding them”.

“There’s kind of a narrow spectrum of opinion that you’re allowed to fall within, but it rarely allows for people like myself who are just simply opposed to these wars altogether,” he said.

In an interview with The Real News, Rubin said that most Americans have a false idea of what war really entails. When they thank military troops for their service, they don’t really know what that means.

“That state terror on the part of our own government has very little to do with defending the interests of most Americans,” he added.

Rubin, who served in the US Marine Corps for five years, has since become a member of About Face: Veterans Against the War. He is also a historian studying for a PhD at the University of Rochester, and a member of the Democratic Socialists of America.

The marine-turned-activist said he despaired at the fact that it was now Democrats who are “most inclined” to label those they disagree with as traitors and most inclined to “accept declarations or demands made by a defense establishment that apparently can do no wrong.”