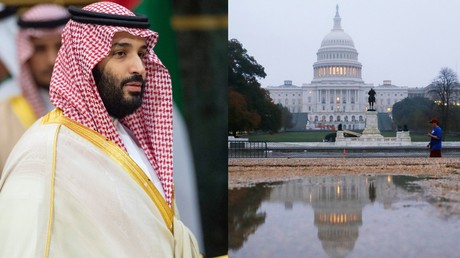 The US Senate has unanimously passed a resolution calling Saudi Crown Prince Mohammed bin Salman responsible for the murder of journalist Jamal Khashoggi, who was brutally killed and dismembered in the Saudi consulate in Istanbul.

The resolution demands that Riyadh “ensure appropriate accountability” in this case. The move came just minutes after the senators passed a separate motion calling on the US to stop any aid to the Saudi-led military campaign in Yemen.

The Senate called the situation in the war-ravaged country a “humanitarian crisis” and demanded all parties seek an immediate ceasefire. It is yet unclear whether the House would vote on any of the motions after they had passed the Senate.

The move came a week after CIA Director Gina Haspel appeared on Capitol Hill to tell a dozen or so senators about intelligence her agency had on Khashoggi’s death. The briefing apparently solidified the belief, at least among some of them, that the Saudi crown prince was, indeed, behind the murder.


The two resolutions are adding to the mounting pressure on President Donald Trump to officially place the blame for the Washington Post columnist’s murder on MBS – something he has, so far, been reluctant to do.

Riyadh has denied that the crown prince had any prior knowledge of the killing. However, some Saudi high-ranking officials, including MBS’s former communications chief, Saud al-Qahtani, have been fired following the murder. Five members of the hit squad that allegedly executed the murder are facing the death sentence in Saudi Arabia.