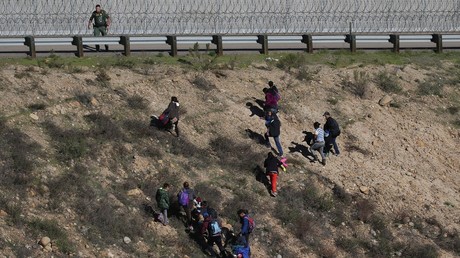 Some $5.8 billion in economic development assistance will be given to the three Central American countries, and another $4.8 billion to Mexico, for the sake of “enhancing security, governance, and economic prosperity that can create greater opportunities and benefits for the people of the region” and help “jointly address the shared challenges of migration, narcotics trafficking, and the activities of trans-national criminal organizations,” the State Department said in Tuesday’s announcement.

“I think this is good news, very good news for Mexico,” said Mexican Foreign Relations Secretary Marcelo Ebrard, according to AP. He added that the “commitments established here signify more than doubling foreign investment in southern Mexico starting in 2019.”

Ebrard had previously sought $25 billion in US investments in the region, according to AP.


The investments are aimed at creating better political and economic conditions in the impoverished southern Mexico and the so-called “Northern Triangle” countries. The vast majority of migrants in the so-called “caravans” arriving on the US border in recent months have originated in El Salvador and Honduras, attracting more members as they passed through Guatemala and Mexico.

“I have a dream that I want to see become a reality … that nobody will want to go work in the United States anymore,” Andres Manuel Lopez Obrador, the recently inaugurated president of Mexico, said earlier on Tuesday.

The announcement comes amid a tense standoff between President Trump and Democrats in Congress, who have vowed to block any attempts to fund the proposed wall on the border with Mexico to the tune of $5 billion. Though Trump has said he would be willing to shut down the government in order to get the funding for the wall, his own press secretary contradicted that message.

Trump’s critics have pointed out that his campaign promise was not just to build the wall, but to make the southern neighbor pay for it. Mexico has outright refused to even contemplate such a possibility.

Washington reportedly sought a pledge from Mexico to enforce its immigration laws and stop Central American migrants from getting to the US border. A planned announcement about Mexico’s migration policy has been postponed for Wednesday, however.

According to one human rights activist, however, the announced aid actually offers far less than the State Department statement indicates.

“It’s nearly all private-sector loans and guarantees. Money that has to be paid back—not assistance,” tweeted Adam Isacson of the Washington Office on Latin America (WOLA). “The rest is aid that the US was giving anyway.”