The US White House and Pentagon have dismissed Russia’s new nuclear arsenal as “no surprise.” American officials took the opportunity to accuse Russia of treaty violations and boast that their arsenal is “second to none.”

“America is moving forward to modernize our nuclear arsenal and make sure our capabilities aren’t being matched,” White bragged in response.

“US defense capabilities are and will remain second to none, and now because of the new defense budget of $700 billion our military will be far stronger than ever,” Sanders said. “As the president’s nuclear posture review made clear, America is moving forward to modernize our nuclear arsenal and ensure our capabilities are unmatched.” 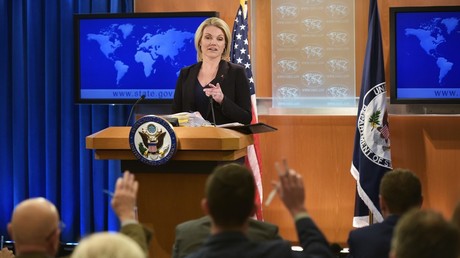 She also accused Russia of violating a 1980s missile treaty. “President Putin has confirmed what the United States government has known all along, which Russia has denied: Russia has been developing destabilizing weapons systems for over a decade in direct violations of its treaty obligations,” Sanders said.

At the State Department, spokeswoman Heather Nauert attacked the CGI video simulation played during Putin speech to demonstrate the new missiles’ capabilities. Nauert claimed it depicted an attack on the US, despite there being no depictions of presumed targets or points of impact. When journalists in the briefing room, both Russian and American, pointed out that detail, she deflected their comments.

During his address, Putin said everything Russia is doing to strengthen its defenses is within existing arms control agreements. “I should specifically say that Russia’s growing military strength is not a threat to anyone; we have never had any plans to use this potential for offensive – let alone aggressive – goals.”

Russia’ embassy to the US issued a separate statement, pointing out that the Sarmat missile Putin showcased is within the provisions of the 1982 INF treaty.

President Putin reversed the accusations in an interview with NBC that followed his address and the American reactions. “If we are to speak of an arms race, then an arms race began at exactly the time and moment when the US opted out of the anti-ballistic missile treaty,” he told host Megyn Kelly.