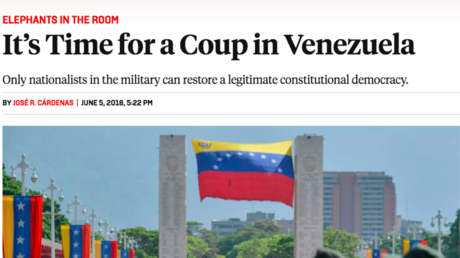 If you’ve followed American media in recent times, you will have probably heard that meddling in affairs of foreign nations is a bad thing — but it seems that view changes dramatically when the US is the one doing the meddling.

Venezuelan President Nicolas Maduro was reelected in May in what Washington wrote-off as a “sham” election. In response, the Trump administration slapped new sanctions on the South American country and seemingly won’t be happy until Maduro and his socialist regime packs up and disappears.

Confirming that it’s Washington’s way or the highway, a former US official who worked as assistant administrator for Latin America at the US Agency for International Development, under the Bush administration, has openly called for a military coup — and Foreign Policy magazine has obligingly published his thoughts.

No biggie, just a major US foreign policy website running a piece calling for the violent, military overthrow of another country’s government. Meh. And a bonus: subhead says without irony only “military can restore a legitimate constitutional democracy.”https://t.co/8W0Qpksset

José R. Cárdenas has argued that “dialogue or diplomacy cannot bring a resolution” and insists that a military coup is a more attractive option. It is up to the US, he writes, to convince the Venezuelan military that they “bear a unique responsibility to rescue their country from the abyss” and that they must stand up and get rid of Maduro by force. It is the military, he writes, that are best placed to “restore a legitimate constitutional democracy.”

So concerned with the plight of the Venezuelan people, Cárdenas also touts the benefits of “diplomatic and economic isolation” which surely would do wonders for ordinary citizens. Graciously, Cárdenas accepts that such a plan “entails risk” but argues that it is “unlikely” that the military would seek to govern permanently.

For some, democracy is optional, it is just a mean to get power. Otherwise, they are happy with coups and other good things. https://t.co/boLKRWPwl7

But Cárdenas’ calls for a coup could hardly come as a surprise. It’s far from the first time current or former US officials have publicly called for the ousting of the Venezuelan president.

In February, Florida Senator Marco Rubio publicly called for a military coup in Venezuela on Twitter, saying that the “world would support” the armed forces if they rose up to remove Maduro.

Rubio’s comments followed similar ones from then Secretary of State Rex Tillerson who hinted at a military coup during an appearance at the University of Texas — without actually using those explicit terms.

“In the history of Venezuela and South American countries, it is often times that the military is the agent of change when things are so bad and the leadership can no longer serve the people,” Tillerson said.

But it’s not just government officials. Even the New York Times has gotten in on the action, publishing an editorial about how Maduro “must go” and discussing how best to “get rid of” him — although the paper of record managed to restrain itself slightly and did not call for an outright coup.