The DOJ is increasingly optimistic about the prospect of bringing Julian Assange before a US court and is reportedly planning to formally charge the whistleblower in the hope of getting him out of the Ecuadorean embassy in London.

Over the past year, prosecutors in the United States have been discussing the possibility of charging the WikiLeaks co-founder with a number of crimes, which, they hope, could see Assange expelled from the Ecuadorean embassy in London, Washington-based sources familiar with the matter have told the WSJ.

While the DOJ has been investigating Assange for eight years, the prosecutors have yet to agree on the precise charges the 47-year-old might face. The possibility of charging the whistleblower with violating the Espionage Act has come up in discussions, WSJ notes. 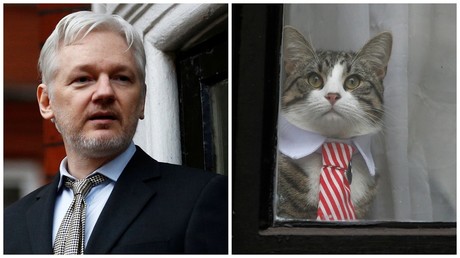 The DOJ could choose to prosecute Assange in connection with Chelsea Manning’s disclosure of some 750,000 military and diplomatic documents to WikiLeaks back in 2010. In particular, the publication of classified US military footage entitled ‘Collateral Murder’ made headlines at the time, after it showed a US Apache helicopter opening fire on Iraqi civilians.

“Prosecutors have also considered tying Mr. Assange to foreign intelligence services,” people familiar with the discussions told the publication. If so, charges against the WikiLeaks editor could be potentially linked to the notorious probe by special counsel Robert Mueller, who is struggling to find proof of Russia’s ‘interference’ in the 2016 US election.

WikiLeaks found itself at the center of the probe after publishing internal emails from the Hillary Clinton campaign chairman John Podesta ahead of the election. Mueller has already indicted 12 Russians in July on charges related to the hacking of the Democratic National Committee (DNC), and Assange could potentially come next, even though WikiLeaks always insisted their source had nothing to do with Moscow.

The Justice Department is also feeling “increasingly optimistic” about the possibility of having Assange extradited to the US, the Washington insiders believe, especially because of the growing rift between Assange and Ecuador’s leadership.

The whistleblower has become a thorn in President of Ecuador Lenin Moreno’s side, ever since the new leader assumed office in May of last year. Throughout this time, Moreno has made every effort to make sure the Australian’s stay at Ecuador’s UK embassy comes to an end as soon as possible.

Assange’s lawyer Barry Pollack, however, told the WSJ that he had “heard nothing from authorities suggesting that a criminal case against Mr. Assange is imminent.”

Prosecuting someone for publishing truthful information would set a terrible and dangerous precedent.

Assange was granted asylum inside Ecuador’s UK embassy in August 2012, avoiding extradition to Sweden. While Sweden has since dropped the case against him, Assange was forced to remain inside the embassy because he is still subject to arrest in the UK for jumping bail six years ago. The 47-year-old fears that, once British authorities detain him, he will immediately be extradited to the US where he is likely to face serious charges over his role at WikiLeaks.