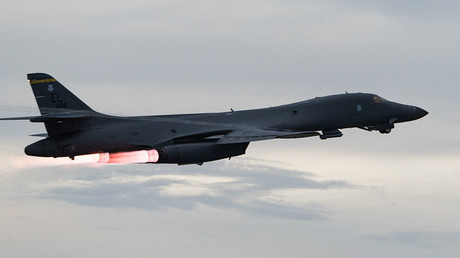 The US House Intelligence Committee is planning hearings after deciding China is probably the biggest threat to America, giving Russia a week off. But RT wonders what would hearings about the threat posed by the US look like?

Republican Committee Chairman Devin Nunes said: “China has only become emboldened and now may be the pre-eminent threat to American security, our economy and our values.”

Other areas that the intelligence leaders will look at include the acquisition of national security technology and US intellectual property, its “influence campaign,” and cyber-security threats. So, if there was such a country as, say, Eastern Pacifica, what would the US threat look like to them? RT has taken the opportunity to speculate. Please note, Eastern Pacifica does not actually exist.

GOVERNMENT OF EASTERN PACIFICA HOLDS HEARINGS ON US THREAT

The parliament of Eastern Pacifica is to hold a series of hearings into the behavior of the United States of America, after deciding that it probably poses the biggest threat to Eastern Pacifica’s security, economy and values.

The hearings will concentrate on the build-up of US military bases across the Eastern Pacifica region. Members of the committee have started to suspect that the 400 or so US military bases surrounding our borders show that Washington could be more than willing to resort to force, whenever it sees fit. It will use the numerous wars launched by Washington as evidence. Recent discussions in Washington labelling our own single naval outpost in Madagascar, and deployment on a couple of tiny man-made sand banks as a threat, appear to the committee to be threats. Members will examine whether it is expedient to add to our current two ageing aircraft carriers to counter the United States’ 80 carriers.

Eastern Pacifica is growing increasingly concerned about the economic threat posed by the United States, and growing evidence that the current incumbent of the White House may be making up policy “on the hoof.” Eastern Pacifica is perturbed that Washington has labelled it an economic threat, considering that a large part of America’s recent economic growth has been driven by the sale of its own government debt to Eastern Pacifica, as well as the exploitation of our cheap labor costs. It is seen as unfortunate that the US could decide that what appeared to be a successful relationship is now being labelled as a threat, especially with the president now threatening trade wars most days.

As a nation with thousands of years of history, Eastern Pacifica has grown increasingly wary about the encroachment of so-called “American values.” With the dominance of Hollywood films and American-made television series, we will examine the influence of what appears to be an obsession with militarism and weaponry, violence towards women, as well as concern over the influence of unaccountable ownership of the media companies producing the material.

The committee will examine the use of technology to influence the children of Eastern Pacifica, especially from California-based conglomerates. The threat posed by products produced by Apple inc. can be easily examined as much of them are produced here in Eastern Pacifica. The malign influence and monitoring capabilities of Facebook and Twitter will be a focus for the committees, as well as any links they are rumored to have to American intelligence services.