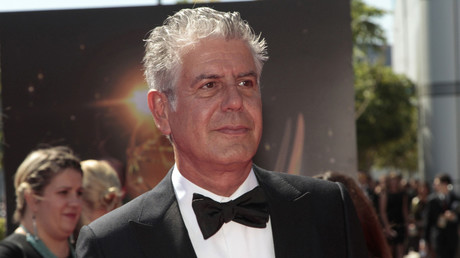 US celebrity chef Anthony Bourdain has been found dead in a Paris hotel room, according to media reports. The television personality was 61. It is thought he committed suicide.

Bourdain was in France working on an upcoming episode for his award-winning television series ‘Parts Unknown’. His body was found by a friend in his hotel room early Friday morning, according to CNN anchor Jake Tapper.

“It is with extraordinary sadness we can confirm the death of our friend and colleague, Anthony Bourdain,” CNN said in a statement Friday morning. “His love of great adventure, new friends, fine food and drink and the remarkable stories of the world made him a unique storyteller. His talents never ceased to amaze us and we will miss him very much. Our thoughts and prayers are with his daughter and family at this incredibly difficult time.”

Bourdain became an outspoken advocate of the anti-sexual harrassment #MeToo Movement after his girlfriend, Asia Argento, accused Harvey Weinstein of sexual assault in October. CNN confirmed Bourdain’s death on Friday and said the cause of death was suicide.

His death comes just days after fashion designer Kate Spade hung herself in an apparent suicide at her Manhattan apartment.

This is so awful.

Anthony Bourdain, 61, has died. He took his own life.

He was in France working on an upcoming episode of his award-winning CNN series. His close friend Eric Ripert, the French chef, found Bourdain unresponsive in his hotel room Friday morning.

The suicides of Anthony Bourdain and Kate Spade this week are a reminder: No matter how successful, wealthy or seemingly happy you are, we all battle our own demons.

Reach out to one another. Destigmatize depression, addiction and anxiety.

We are all in this together.

I feel this death in my bones. @Bourdain had what I’d call a generous curiosity about the world, guiding audiences through it with an awe, respect, and humor that are all too uncommon. Also rare: he knew what he didn’t know. I never knew him in person. I will miss him terribly.

The fact that Bourdain was a former addict was so important, the idea that you could go on to live a rich and full and outward reaching life after getting out of your personal pit. It got read as “bad boy chef” but it was so much more substantive. And also makes this such a blow.

The culinary rock star got his big break back in 1999, after writing a wildly popular article for the New Yorker which was later adapted into a best-selling book. He later hosted “A Cook’s Tour” on the Food Network, then moved to the Travel Channel with a new show, “Anthony Bourdain: No Reservations.” In 2013, he joined CNN and was the star of “Anthony Bourdain: Parts Unknown” – Season 11 of which aired on the network last month. His television programs have won numerous Emmy and Peabody Awards.