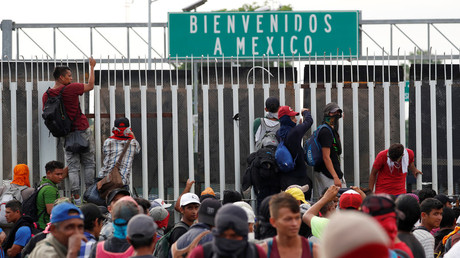 After suspending all traffic at the US’ busiest port with Mexico, border patrol guards had to resort to tear gas to fend off migrants trying to breach the border wall to gain entrance by other means.

All crossings were completely suspended at the US’ busiest point of entry following a gate rush attempt where hundreds of migrants attempted to push past Mexican police. With the main legal point of entry barred off, a large group of migrants assembled for a protest began to climb fences and break holes in the border wall in order to reach US soil. After one group attempted to enter through an opening in the border fence, border patrol pushed them back with tear gas that left the asylum seekers fleeing and coughing, including children as young as three who had been brought to the site of the confrontation. Demonstrators responded by throwing rocks and other projectiles.

A migrant family, part of a caravan of thousands traveling from Central America to the U.S., run from tear gas in front of the border wall between the U.S. and Mexico at Tijuana on Sunday – @Reuterspic.twitter.com/R42zIHedJu

Current Situation: Migrants broke through this wooden fence to try and cross into the US via the train tracks and are now being pushed back by riot police – the border crossing remains closed and the migrants have nowhere to go but to turn around and go back #MigrantCaravanpic.twitter.com/nwBYQ2EhIV

The San Ysidro entry port between Tijuana and San Diego is the US’ busiest point of entry, with nearly 100,000 northbound entries taking place each day. Some 5,000 migrants, part of a caravan of Central American migrants, are currently camped out while they attempt to apply for asylum, but some are growing impatient with the official process. The asylum seekers are currently housed in a sports stadium in Tijuana which has been converted into a makeshift shelter.

Ana Zuniga, 23, from Honduras cradled 3-year old daughter with red burning eyes. “We ran but when you run the smoke smothers you more.” Said US agents began launching gas when migrants opened small hole in concertina wire at bottom of Tijuana River. She didn’t see anyone get thru

As the caravan approached the border between the US and Mexico, the Trump administration mobilized hundreds of troops to try to maintain control of a potentially chaotic situation, and while many felt the government’s response was overkill, it now seems some cautionary measures were advisable. Trump has been explicit about how he plans to handle the situation, tweeting that the Democrats created the problem, and that there would be “no crossings”.

Would be very SMART if Mexico would stop the Caravans long before they get to our Southern Border, or if originating countries would not let them form (it is a way they get certain people out of their country and dump in U.S. No longer). Dems created this problem. No crossings!

Despite an initial WaPo report that claimed the US and Mexico had come to an agreement on a change in US asylum law which would prohibit asylum seekers from waiting in the US while their status is pending, Olga Sanchez Cordero, Mexico’s incoming interior minister has since denied any such agreement took place. Nonetheless, Trump still claims that all applicants will remain outside the country’s borders. The asylum process takes half a year on average and is currently flooded with a large backlog of applications. Nearly 40,000 people apply for asylum each year in the US.