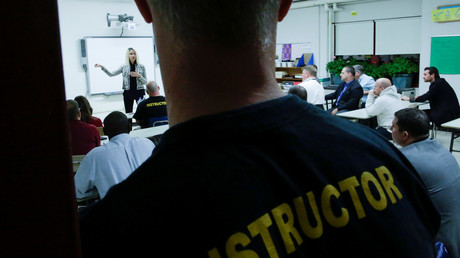 A US Army war simulation game, adapted to prepare teachers for school shootings, will also allow participants to play the part of the gunman in a mock ‘active shooter’ situation.

There are three playable roles in the video game-like simulation – teacher, shooter, and officer. Suspects can be both adults and children. The virtual program is due to be released free to schools in the coming weeks.

The $5.6 million VR program called EDGE (Enhanced Dynamic Geo-Social Environment) was developed by the US Army and the Department of Homeland Security. Similar technology has previously been used to prepare soldiers for war.

Bob Walker, EDGE project manager with Cole Engineering Services, said the simulation allows schools to test what might work best for them in the event of an active shooter situation at their facility. The game also analyzes factors such as automatic closing doors or barricades.

The team, led by Tami Griffith from the Army Research Laboratory, listened to dispatch tapes from the Virginia Tech and Sandy Hook shootings to make the virtual scenario as real as possible. They also spoke with the mother of a Sandy Hook victim.

“She walked through the entire event, incident by incident, explaining it all to us. Very technically she was able to separate herself, and technically tell us what happened, so that we could emulate that in the virtual environment,” Griffith said.

The simulation gives advisory prompts on the screen including locking doors, staying away from windows, and lining up students against the walls for their own protection.

FBI data shows that nearly a third of all mass shootings in the US since 2000 have taken place at schools. According to Everytown Research – a nonprofit organization which advocates for gun control – there have been 275 school shootings since 2013. These include accidental shootings and events where a gun was fired but no one was harmed.

EDGE virtual training has already been rolled out to first responders in which the scenario of an active shooter situation at a hotel is played out.

RT has reached out to the Department of Homeland Security for comment on the extension of the program into the educational sector.

Critics of the project say it is wholly inappropriate and fails to address issues surrounding access to weapons. Other social media users went as far as to suggest the video game offers a training ground to potential attackers.

Jesus Christ. The US Army and DHS intend to release a free game later this year that lets you play the role of a mass school shooter, explicitly modeled after Columbine, Sandy Hook, and Virginia Tech.

What has our country come to?https://t.co/4nEG0AXSUa

So, to help avoid shootings in schools in the US, what do you do?
Ban guns? Nah.
At least put a few basic restrictions on who can buy guns, like not selling them to the mentally ill? Nah.
First person shooter videogame? Yep!