The US Air Force is looking for contractors to upgrade its ‘Doomsday plane,’ – the ultimate command aircraft designed to carry the top brass in the event of war. Its nuclear communications systems are to be modernized.

The document published on the Federal Business Opportunities website is an early-stage call for contractors to present their bids. Solicitation is scheduled for early 2019. The contractor is expected to “sustain and modernize critical capabilities” of the Boeing E-4B, also known as the ‘Doomsday plane.’ The aircraft’s National and Nuclear Communication Systems are the primary focus of the contract. 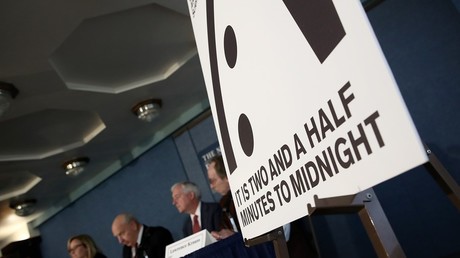 The E-4B, designed in the 1970s and last modified in the 1980s, is based on a Boeing 747-200, reinforced to protect it from both thermal impact and electromagnetic pulse that accompanies a nuclear blast. It also features a war room and an array of communications equipment to coordinate the US military in case of a nation-wide emergency.

All the safeguards proved insufficient against the force of nature in June 2017, however, when a tornado hit the Offutt air base where the E-4Bs are based. The damage it caused left only one out of the four ‘Doomsday planes’ operational for months.

At least one E-4B is required to constantly be ready to take off within minutes, and whenever one does rise into the air it’s bound to cause a stir. One was noticed taking off in mid-April, in the run-up to the joint US-UK-France missile strike on Syria.

Russia, meanwhile, is also modernizing its own ‘Doomsday plane.’ In 2015, the United Instrument Manufacturing Corporation (UIMC), a Rostec subsidiary, created a second-generation “airborne strategic command hub” to replace the previous, 1980s design. Meanwhile, work is already underway to develop a cutting-edge third-gen replacement, which, according to UIMC, is expected to start service in 2020-2022.