The International Institute of Strategic Studies, an influential UK diplomacy and security think tank run by prominent military, political, and business figures, has received over $38mn in secret donations from Bahrain.

Bahrain, a former British colony and oil-rich Arab country which accommodates the US Navy’s Fifth Fleet, had secretly donated more than $38 million (£30 million) to the International Institute of Strategic Studies (IISS), a reputed UK think tank which positions itself as a leading global military and security research consultancy, according to human rights group Bahrain Watch.

The donations, which the IISS received over the course of five years, were said to form around a quarter of the think tank’s budget, or over $7.6 million (£6 million) per year, Bahrain Watch said citing confidential documents it obtained in cooperation with the Guardian.

Money from the Bahrain government was received in large part under a secret memorandum of understanding (MoU) between IISS head John Chipman and Bahraini Foreign Minister Sheikh Khalid Bin Ahmed Al Khalifa, who had previously served as ambassador to the UK.

The IISS and Bahrain agreed to “take all necessary steps to keep confidential all classified information which is disclosed or obtained in relation to this MoU, and neither shall divulge such information to any third party.”

The event itself, called the Manama Dialogue, was financed by Bahrain’s ruling family, which is paying for all the delegates to stay at the Ritz-Carlton Hotel, the report said. Since 2011, the ruling family has donated $19 million (£14.9 million) to fund the conference, which is attended by influential figures from the Gulf and western nations, among others, the leaked papers show.

In a statement, the IISS said its agreement with the Bahraini rulers “expressly gives the IISS full freedom to develop the agenda and invite participants in line with priorities it judges to be important to encourage strong debate on regional issues and facilitate important diplomatic contacts.”

“The Bahraini government is willing to spend so much on the IISS and the Manama Dialogues because they allow the government to portray itself as modern, liberal and business-friendly, in contradiction to the evidence of torture, abuse and political disenfranchisement,” Bahrain Watch said in turn.

In April, a report for the Foreign Affairs Select Committee blasted Bahrain’s poor human rights record, not least during the violent suppression of the Arab Spring protests, with direct support from another controversial UK ally – Saudi Arabia. 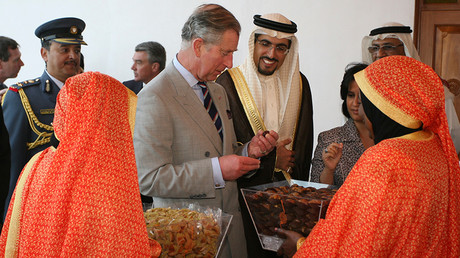 In mid-November, a new Royal Navy base in Bahrain was inaugurated by Prince Charles, with construction mostly funded by the Bahrainis. The US Naval Forces Central Command (NAVCENT) is also headquartered in the country, guiding the operations of the Fifth Fleet.

Founded in 1958, the IISS describes itself as a primary source of information on international strategic issues for “politicians and diplomats, foreign affairs analysts, international business, economists, the military, defense commentators, journalists and academics.”

Apart from the Manama Dialogue, the institute hosts the Shangri-La Dialogue, an annual meeting of Asia-Pacific region defense ministers in Singapore.

It also publishes ‘The Military Balance,’ a comprehensive annual assessment of each country’s military capabilities. A 2015 Global Think Tank Index compiled by the University of Pennsylvania ranked IISS as the fourth-best non-US research institution.