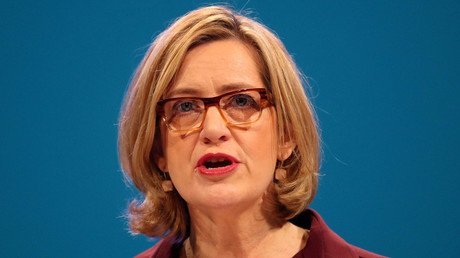 UK PM Theresa May has accepted the resignation of Amber Rudd as Home Secretary, according to media reports citing Downing Street.

Rudd has been under increased pressure to resign since she was accused of misleading Parliament over whether her department had targets for the removal of immigrants.

Rudd’s departure comes on the same day that the Guardian published a private letter to Theresa May from Rudd in January last year, in which she outlined her “ambitious but deliverable” target to deport 10 percent more illegal immigrants over the “next few years.”

Rudd had denied having any knowledge of the use of deportation targets as recently as Friday night, when she took to Twitter to state that she would not be resigning, so as to“ensure immigration policy is fair and humane.”

Rudd insisted she was not aware of the use of “specific removal targets” in the Home Office, but conceded in her apologetic statement that she should have known. She was due to make a statement about the scandal in Parliament on Monday.

2/4 I wasn’t aware of specific removal targets. I accept I should have been and I’m sorry that I wasn’t.

Last week, a leaked internal document revealed that the Home Office did have targets for the removal of illegal migrants as recently as three years ago. The document discussing such targets had been copied to Rudd’s office, however, in her Twitter statement Rudd claimed she didn’t see the notice, but she admitted that it was copied to her office “as many documents are.”

3/4 I didn’t see the leaked document, although it was copied to my office as many documents are.

Rudd reportedly phoned May on Sunday evening to reveal her intention to step down, with a spokesman for No. 10 later announcing that the PM accepted her resignation.