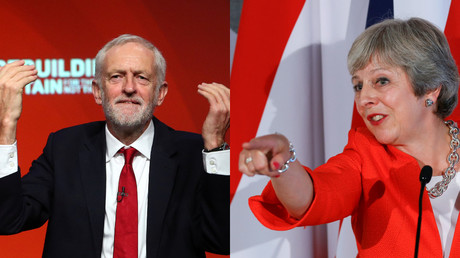 Labour leader Jeremy Corbyn has declared that UK PM Theresa May should call a general election if parliament votes down a Tory Brexit deal based on the Chequers plan, or a “No deal,” which he says would be “a national disaster.”

Corbyn warned May that Labour will vote against her Chequers proposal if it forms the backbone of any final deal with the EU’s 27 member states, and claimed that the prime minister would be forced to call a general election if she could not get it through parliament.

Fine tuning the party’s Brexit position, Corbyn told delegates assembled in Liverpool: “As it stands, Labour will vote against the Chequers plan – or whatever is left of it – and oppose leaving the EU with no deal.”

He declared that a Brexit “No deal” would be “a national disaster” and that “if parliament votes down a Tory deal or the government fails to reach any deal at all, we would press for a general election.”

Even certain Tory supporters reacted positively to Corbyn’s speech. Some predicted the Conservative Party will be “sunk” if they don’t react positively and “explain what they are for and find new policies.”

Tim Montgomerie, the ConservativeHome founder, warned Tory MPs that Corbyn “has a comprehensive and maybe compelling vision for post-crash future of Britain,” and consequently, it “leaves [the] future of our free enterprise system vulnerable. Tick, tock, tick tock for Tory MPs.”

Don’t agree with it but Corbyn has a comprehensive and maybe compelling vision for post-crash future of Britain. May doesn’t and that leaves Tories very vulnerable. Much more than that, it leaves future of our free enterprise system vulnerable. Tick, tock, tick tock for Tory MPs

Financial Times journalist Sebastian Payne tweeted that Corbyn’s speech provided “a real challenge and wake-up call to the Tories,” while the Times’ political sketch-writer warned that the Tories needed to “pull the finger out and explain what they are for and find new policies or they’re sunk.”

So that was Jeremy Corbyn’s best speech to date. Intellectually v coherent, speaking directly to Britain’s desire for change. Full of conciliatory language to party and beyond. Scant on details + business reality. A real challenge and wake up call to the Tories next week #Lab18

That speech, bang on an hour and the best I’ve seen Corbyn deliver, should give the Tories the kick they have badly needed. They need to pull the finger out and explain what they are for and find new policies or they’re sunk. Can’t just rely on Labour being rubbish any more.

Next up is Theresa May and her Conservative Party, who are scheduled to hold their four-day conference from Sunday 30 September, where all eyes will predictably be on the issue of Brexit and whether they can heal their divisions.