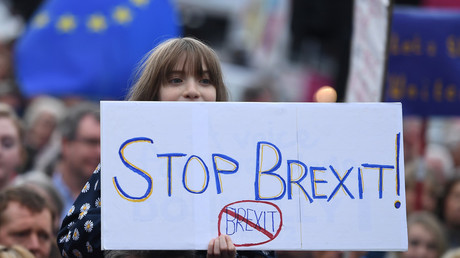 The UK has the power to unilaterally stop the Brexit process, the EU’s top legal advisers have said, contradicting statements from London that stated Article 50 could only be stopped with agreement of all 27 EU member states.

The Advocate General, in a report prepared for the European Court in Strasbourg, stated that the UK could suspend the already triggered two-year Article 50 process, according to a lawyer for the group that brought forward the case.

“Advocate General Campos Sanchez-Bordona proposes that the Court of Justice should declare that Article 50 … allows the unilateral revocation of the notification of the intention to withdraw from the EU,” the bloc’s top court’s statement read.

“The UK parliament has to give its final approval,” wrote the advocate general, in the case of either a satisfactory withdrawal agreement being reached or in the absence of a satisfactory agreement.

This “would open the possibility for the UK to remain in the EU in the face of an unsatisfactory Brexit,” he added.

The Advocate General’s opinions are not binding, judges will now decide on whether or not to accept his advice, though they have a tendency to do so in most cases.

The statement added that it would be possible for the UK to announce its intention to stay in the bloc, up until such time that the withdrawal agreement was “formally concluded.”

It also stipulated that this needed to be in accordance with UK constitutional law, the European Council were informed and that is doesn’t involve and “abusive practice.”

The news will further hinder May’s plans to gain parliament’s approval for her EU withdrawal agreement. 16 weeks remain before Article 50’s deadline on March 29, should parliament reject May’s deal, as they are expected to do, the potential option to halt the process will look more attractive compared to the likely chaos of a no deal Brexit.