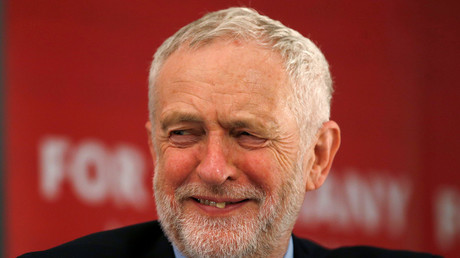 The Russian bots have finally come out of the woodwork thanks to a Sunday Times ‘investigation’ exposing the pesky trolls’ support for Labour in the run-up to last year’s snap general election.

Several Labour and Jeremy Corbyn supporters reacted to what they called an “absurd smear piece” by posting photos of themselves with the caption #WeAreAllRussianBots.

It’s now got to the point where the Sunday Times imply Labour going from 24% to 40% was because of Russian Twitter bots.

Others went one step further, showing solid commitment to the cause, by donning some stereotypical Russian attire for their ‘coming out’ as Kremlin operatives.

The Sunday Times published a joint investigation with Swansea University claiming that 6,500 ‘Russian’ Twitter accounts published messages of support for the British Labour Party in the seven weeks before last year’s general election.

The study has been questioned for its vague details and dubious methodology. Some social media users also expressed little trust in the publication behind the investigation pointing out that the Sunday Times is owned by Rupert Murdoch. Murdoch has been long accused of having a cosy relationship with the Conservative party and using his media outlets to endorse them.

Sunday Times have completely lost the plot with their latest front page. Trying so hard to convince their readers that millions voted Corbyn ‘cus Russian bots’ instead of the fact that our economic and political systems are only serving the interests of the few.

With May’s Tories on the brink of an electoral defeat of historic proportions next week, Rupert Murdoch rides to the rescue. The British public can’t possibly be sick of the Tories. No, it’s the Russians once again doing their malevolent thing.https://t.co/BZ9BWO4puC

Anybody get the feeling the Sunday Times front page is an attempt to take attention away from Amber Rudd and save her job as well as attack Corbyn?

The claim has also been challenged by some members of the Labour party who have dubbed it as part of an ongoing smear campaign against Jeremy Corbyn and the party. Labour MP for Derby North Chris Williamson said it was a “ludicrous smear” peddled ahead of UK local elections, Thursday.

Sunday Times carrying another bullshit smear in the morning. But all they’ve got is smears, whereas Labour under Corbyn is offering hope and a society that works for the many not the few. https://t.co/oON8t6w8FZ