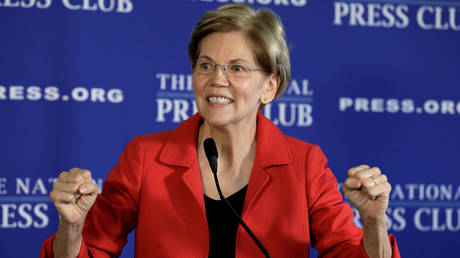 With a mere 673 days until the 2020 US presidential election, Massachusetts senator Elizabeth Warren has announced the formation of an “exploratory committee” to consider a run for the highest office in the land.

In American politics jargon, this means the Democratic senator is most definitely running for president. Warren had repeatedly been named as a possible 2020 candidate since 2016 and even earlier, so her candidacy has come as no surprise to pundits.

But as ever, Twitter was there to react to Warren’s early announcement, which she made with an accompanying video laying out her 2020 vision.

Every person in America should be able to work hard, play by the same set of rules, & take care of themselves & the people they love. That’s what I’m fighting for, & that’s why I’m launching an exploratory committee for president. I need you with me: https://t.co/BNl2I1m8OXpic.twitter.com/uXXtp94EvY

For conservatives, much of the response was comedic and dismissive, with some referring to Warren as “Pocahontas” — the nickname US President Donald Trump uses for the senator due to her claims of Native American ancestry. Warren took a DNA test earlier this year to prove the link, but the Cherokee Nation called the move “inappropriate and wrong.” Some also joked that they had “reservations” about Warren’s run.

Why do we call her Pocahontas?

Because her career was flatlining for years, so she then created a fake Native American heritage to use affirmative action to her advantage at Harvard and then lied about it for years

I have big reservations about Elizabeth Warren running. Get it?

Guys I just heard about Elizabeth Warren 2020 and I dunno, I have some reservations about this

Warren has been a leading voice on the left and for years has launched withering attacks on the US banking system, which made her a poster child of the progressive movement — but some aren’t buying the narrative that Warren is a progressive hero, particularly since she failed to endorse Bernie Sanders during the 2016 primaries.

Had Elizabeth Warren backed Bernie in 2016, we’d be in a different place today. She didn’t b/c her ambitions were more important. The same reason why she remained silent on NoDAPL & why her foreign policy is as rigtwing as HRC’s.
She has a huge credibility issue we cannot afford.

Some on the left were also skeptical about Warren’s foreign policy positions. While she called out the “bloated” US defense budget in a recent speech and called for cuts, she did not vote against Trump’s massive increases in military spending when she had the chance.

I have never looked at Warren’s foreign policy comments and votes before, but I am quite shocked about what I have just read tbh

No. Warren isn’t great on foreign policy and Gillum walked back his progressivism on the way to lose the election.

Some thought Warren missed her chance in 2016…

Warren was in a stronger position in 2016 than she will be in 2020, imo. Her strength is that outside of Sanders, she has one of the more credible claims on class war politics. But if she abandons it in a misguided attempt to be broadly appealing, she’s toast

In my opinion, if Hillary Clinton didn’t run in 2016, I think Elizabeth Warren would’ve thrown her hat into the ring and likely become the nominee.

…while others were simply happy at the news that a progressive had thrown her hat in the ring and doubted the naysayers for “underestimating” her chances.

People are really underestimating Elizabeth Warren. She’s still as well-positioned as anybody in the 2020 field to unite the entire left and take on Trump’s nationalism disguised as populism with ACTUAL populism.

I think people are truly underestimating how important Elizabeth Warren’s brand centered around taking a pick axe to Wall Street will be an asset in the primary and general.

I’m glad to see Elizabeth Warren have the fortitude to go first, while everyone else is still wading through as some of their supporters are waging this silly mother-of-all-battles. Good for her. We need choices, and the broad swath of voters will decide.

And some just seemed exasperated at the thought of the 2020 campaign season (and all that goes with it) beginning so early.

With Elizabeth Warren’s announcement that she is forming an exploratory committee for president we begin the most consequential part of our corrupt and defective process for selecting a president-the money primary, when candidates must prove they can raise 9 figures to be viable.

And so it begins – a long and likely bruising Presidential campaign season in the midst of still trying to understand the last one: “Sen. Elizabeth Warren says she will seek the presidency in 2020” https://t.co/UgWbpUo4Bn