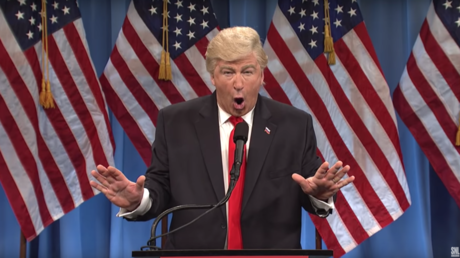 President Donald Trump has offered his mimic-in-chief, Alec Baldwin, some rare words of support after the actor –known for impersonating him on SNL– was detained for punching a man in the face during a parking spot brawl in NYC.

“I wish him luck,” Trump told reporters outside the White House just hours after Baldwin was detained over a parking lot brawl.

Trump, who is known for his harsh words towards his critics, apparently showed sympathy for the 60-year-old actor, who won an Emmy Award last year for his impersonations of the president on Saturday Night Live.

The outspoken critic of Trump, whose career the Republican president once said was only “saved by his terrible impersonation of me on SNL,” was briefly arrested on Friday afternoon.

Alec Baldwin, whose dying mediocre career was saved by his terrible impersonation of me on SNL, now says playing me was agony. Alec, it was agony for those who were forced to watch. Bring back Darrell Hammond, funnier and a far greater talent!

Agony though it may be, I’d like to hang in there for the impeachment hearings, the resignation speech, the farewell helicopter ride to Mara-A-Lago. You know. The Good Stuff. That we’ve all been waiting for.

The actor allegedly punched a man in the face after he reportedly pulled in and took Baldwin’s parking spot in the West Village.

While Baldwin was charged with assault and harassment, the injured man was rushed to the hospital for a damaged left jaw. Baldwin is to appear in court at a later date to face the charges.

1- Normally, I would not comment on something as egregiously misstated as today’s story.
However, the assertion that I punched anyone over a parking spot is false.
I wanted to go on the record stating as much.
I realize that it has become a sport to tag people w as many negative