Donald Trump has threatened to deliver a devastating blow to his critics by declassifying documents related to Robert Mueller’s probe unless his political opponents stop harassing witnesses into lying about Russia collusion.

After securing the majority in the House of Representatives in the midterm elections, the Democrats have vowed to launch investigations on a wide range of topics involving the administration, including Trump’s alleged attempts to influence the ongoing Russia probe. The Republican president, who earlier warned of a “war-like posture” if his opponents continue to gang-up on him, stressed on Wednesday that he is ready to challenge this “harassment.”

“If they go down the presidential harassment track, if they want go and harass the president and the administration, I think that would be the best thing that would happen to me,” Trump told the New York Post.

I’m a counterpuncher and I will hit them so hard they’d never been hit like that. 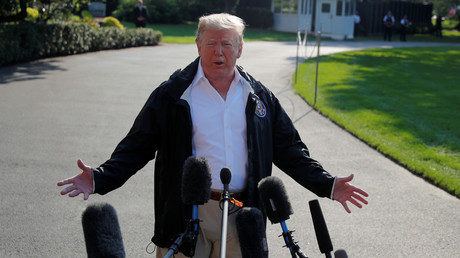 As a means of getting back at his opponents, Trump said he could declassify documents from Robert Mueller’s probe, the public release of which was shelved on Presidential orders in September.

“I think that would help my campaign. If they want to play tough, I will do it. They will see how devastating those pages are,” Trump stated, noting that it would be “more powerful” to release the documents when the new Congress takes over next year.

In September the White House said it would declassify the Russian probe documents –including surveillance warrant applications on former campaign adviser Carter Page– before Trump announced the delay of their release due to their sensitive intelligence content. Democrats and the intelligence community have both opposed declassifying the documents, saying that would interfere with Mueller’s probe into Trump’s alleged collusion with Russia.

Trump on Wednesday accused Mueller’s team of harassing witnesses into lying about alleged collusion, amid his supporters’ calls for key Democratic figures to be investigated for treason.

While the disgusting Fake News is doing everything within their power not to report it that way, at least 3 major players are intimating that the Angry Mueller Gang of Dems is viciously telling witnesses to lie about facts & they will get relief. This is our Joseph McCarthy Era!

“At least 3 major players are intimating that the Angry Mueller Gang of Dems is viciously telling witnesses to lie about facts & they will get relief,” Trump tweeted. “This is our Joseph McCarthy Era!”