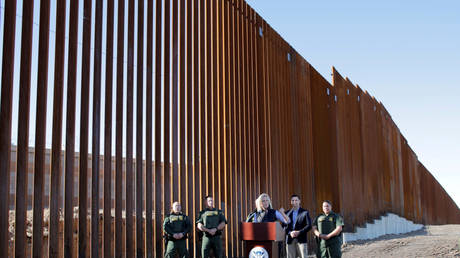 US President Donald Trump has posted a sketch of the “artistically-designed steel slats” that have replaced a solid wall in his vaunted border security vision, calling the design “beautiful” as Twitter short-circuited in response.

Despite the prominent place “The Wall” has held in his campaign and post-campaign slogans, Trump studiously avoids calling the structure a “wall” in his tweet – instead, it’s a “Steel Slat Barrier,” complete with a border patrol truck – for scale – and a close-up of the slats’ pointy tips: the president’s idea of “beautiful.”

Twitter was quick to point out a few design flaws.

Hmm welders? Tunnels… a foam block over the top spikes and a tall ladder?

Some users even tried to be helpful…

…while others assumed it was Trump’s idea of a compromise.

…admittedly, Trump walked right into that last one.

The president has expended a lot of political capital in the past few weeks pushing for a wall, though he admitted earlier this week it wouldn’t be a full concrete wall, but “artistically designed steel slats” (presumably, pictured above). Trump stubbornly declared last week he’d be “proud” to shut down the government if it meant getting his way, angering Democratic Congressional leadership and frustrating those in his own party – like outgoing Speaker of the House Paul Ryan – who’d rather compromise and go home for the holidays.

Also on rt.com
Wall or fence? Trump & Dems clash on what to build on Mexico border amid risk of govt shutdown


The House of Representatives finally passed a bill that included wall funding on Thursday, but that bill has stalled in the Senate, leading the president to cancel his Christmas trip to Mar-a-Lago and settle in for a shutdown he says will last “a very long time” if Democrats don’t see the light. Funding for some government agencies is set to expire at midnight on Friday.