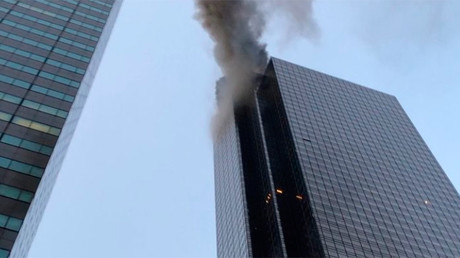 A fire broke out in New York City’s Trump Tower, the 58-story headquarters of sitting President Donald Trump’s business empire. Firefighters were quick to bring it under control.

Footage from the scene showed a column of smoke rising from the skyscraper as firefighters were standing on its roof.

The fire was reported at the high-rise building on Fifth Avenue just before 7am local time, the New York City Fire Department told media. Over 120 firefighters arrived at the scene to put out the flames, and by around 8am smoke from the roof had started to dissipate.

It’s not yet clear what started the fire. The NYPD has reported no casualties, and has not ordered any evacuations. The president himself is reported to be in Washington, DC.

Fire crews are responding to a fire at Trump Tower. There have been no injuries or evacuations, and the President is not currently at Trump Tower. pic.twitter.com/xcsHVX5bhP