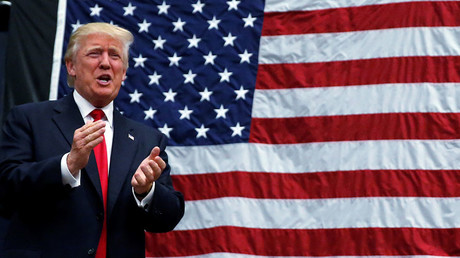 Donald Trump has called for an independent special prosecutor to be assigned to investigate the Clinton Foundation, saying that neither the FBI nor the Department of Justice can be trusted after their judgment on Hillary Clinton’s email controversy.

“The Clintons made the State Department into the same kind of pay-to-play operation as the Arkansas government was: Pay the Clinton Foundation huge sums of money and throw in some big-speaking fees for Bill Clinton, and you got to play with the State Department,” Trump said during a speech to supporters in Akron, Ohio.

US federal law implies that independent counsel can be appointed if the attorney general determines that an investigation by the Department of Justice “would present a conflict of interest for the department or other extraordinary circumstances” and “that under the circumstances, it would be in the public interest to appoint an outside special counsel,” Time magazine says.

Trump specifically stressed that, considering how the Department of Justice and the FBI handled the investigation into Hillary Clinton’s use of private email while she was secretary of state, their impartiality is questionable.

“After the FBI and Department of Justice whitewash Hillary Clinton’s email crimes, they certainly cannot be trusted to quickly or impartially investigate Hillary Clinton’s new crimes, which happen all the time.”

The Republican nominee said he does not have faith in current US Attorney General Loretta Lynch.

She met with former President Bill Clinton in June and said they did not discuss the ongoing investigation into Hillary Clinton’s use of a private email server for classified governmental correspondence while serving as secretary of state.

“The Department of Justice has acted very unethically, particularly the [US] Attorney General’s [Loretta Lynch], private, lengthy, 39-minute meeting in the back of an airplane, before the Department’s [of Justice] decision not to prosecute her for crimes that would have been prosecuted against any other citizen of our country,” Trump said.

“Some former prosecutors have even suggested that the coordination between the pay-for-play State Department and the corrupt Clinton Foundation constitute a clear example of a RICO [Racketeer Influenced Corrupt Organization] enterprise,” the Republican candidate said.

“If the Justice Department fails to do so, it will make it even clearer that a second of the four primary constitutional departments have been corrupted,” Trump added.

On Monday, Judge James E. Boasberg of the Federal District Court  ordered a September 22 deadline for the State Department to review the estimated 14,900 emails from Hillary Clinton’s tenure as secretary of state. The decision means that Clinton’s emails could potentially be released as early as mid-October, mere weeks before the presidential election on November 8, the Wall Street Journal noted.