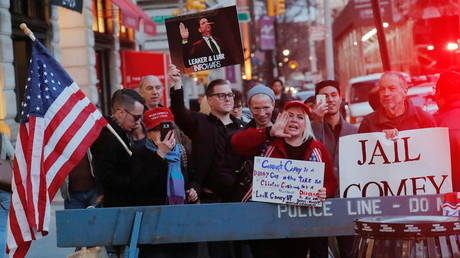 Trump tweeted on Thursday afternoon, wondering why Americans had not yet started to thank him for Comey’s firing and suggesting that they should start expressing their gratitude soon.

When will people start saying, “thank you, Mr. President, for firing James Comey?”

The tweet comes ahead of a Department of Justice report, which is expected to accuse the former FBI director of defying presidential authority on a number of occasions.

Inspector General Michael Horowitz’s report is also expected to be critical of how Comey handled the FBI investigation into Hillary Clinton’s use of a private email server while she was secretary of state.

Trump’s tweet set off a firestorm of both criticism and support. The president’s supporters tweeted in agreement, arguing that Comey’s insubordination justified his firing.

Thank you Mr. President. I’d rather see Hillary in orange though.

The IG Report says it all! Jim Comey was a dirty cop

Trump’s critics, on the other hand, accused the president of attention-seeking behavior and opted to thank Comey for his service instead.

Firing James Comey was just the beginning of your Obstruction of Justice charges which will ultimately result in your impeachment, so “thank you, Mr. President, for firing James Comey.”

Thank you @Comey for being more of a man than Trump.

On Tuesday, Trump revealed his impatience for the DOJ report, bemoaning delays and saying he hoped that the report was not being tweaked to be less critical of either Comey or Clinton.

“What is taking so long with the Inspector General’s Report on Crooked Hillary and Slippery James Comey,” he wrote. “Numerous delays. Hope Report is not being changed and made weaker! There are so many horrible things to tell, the public has the right to know. Transparency!”