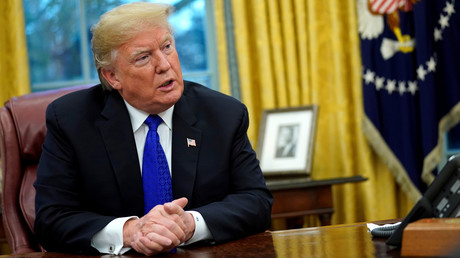 Donald Trump has lashed out at Saturday Night Live, suggesting its “one-sidedness” should be tested in courts. It comes after SNL did a take on the film “It’s a Wonderful Life” which imagined a world where Trump wasn’t president.

The spoof on the classic Christmas flick, in which actor Jimmy Stewart gets a visit from an angel named Clarence, turned Trump (played by Alec Baldwin) into the lead character. The angel took the leader on a journey to see what the world would be like if he wasn’t president.

“But if there’s no Muslim ban, what about a potential terrorist attack?” Trump asked in the sketch. “It was foiled by a team of transgender Navy seals,” Clarence the angel responds, referencing the ban that was announced by Trump in three surprise tweets in July 2017.

Although SNL has been mocking political leaders, celebrities, and just about everyone else for over 43 years, its opposition to Trump has taken the show’s confrontation with the White House to a new level. And the President is more than a little angry about the “Democrat spin machine” show, as well as its network, NBC.

“It’s all nothing less than unfair news coverage and Dem commercials. Should be tested in courts, can’t be legal?” he wrote on Sunday.

A REAL scandal is the one sided coverage, hour by hour, of networks like NBC & Democrat spin machines like Saturday Night Live. It is all nothing less than unfair news coverage and Dem commercials. Should be tested in courts, can’t be legal? Only defame & belittle! Collusion?

Trump declined to specifically address the sketch that was broadcast just one day prior, as well as a number of other jabs taken during the same episode – such as a reference to his current investigations completing “impeachment BINGO.”

The president, who himself was guest on SNL during his campaign, has expressed extreme disapproval of the show –and Alec Baldwin’s portrayal of him– since moving into the White House.

“Alec Baldwin, whose dying mediocre career was saved by his terrible impersonation of me on SNL, now says playing me was agony. Alec, it was agony for those who were forced to watch. Bring back Darrell Hammond, funnier and a far greater talent!” Trump tweeted in March.