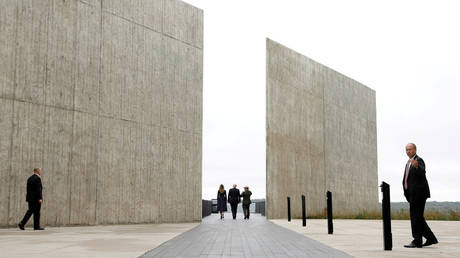 US President Donald Trump is accusing the Democrats of opposing funding for a border wall merely to deny him and the Republican party a policy victory. Walls work, Trump says, pointing to the case of Israel.

“This isn’t about the Wall,” Trump tweeted on Thursday evening, back in Washington after visiting troops in Iraq and Germany as the government shutdown extends beyond Christmas holidays, adding that “everybody knows that a Wall will work perfectly (In Israel the Wall works 99.9%).”

“This is only about the [Democrats] not letting Donald Trump [and] the Republicans have a win,” the president argued. “They may have the 10 Senate votes, but we have the issue, Border Security. 2020!”

This isn’t about the Wall, everybody knows that a Wall will work perfectly (In Israel the Wall works 99.9%). This is only about the Dems not letting Donald Trump & the Republicans have a win. They may have the 10 Senate votes, but we have the issue, Border Security. 2020!

The House of Representatives passed a government funding bill last week that would have allocated $5.7 billion to building the border wall. The bill stalled in the Senate, where it needs 60 votes to advance and Republicans have only 51. Minority Leader Chuck Schumer (D-New York) swore that Trump will “never” get money for the wall.

House Democrats have dug in their heels as well. Nancy Pelosi (D-California), who is supposed to take over as Speaker of the House on January 3, has repeatedly called the wall “immoral, ineffective and expensive.”

Leader Pelosi keeps calling the border wall, “immoral, ineffective and expensive,” and I honestly don’t get how a security fence that stems illegal immigration into the US would be, “immoral.” The president’s opposition should have a more substantive reason to oppose the wall.

With the mainstream media aligned with the Democrats on blaming the shutdown on Trump, the president has taken to Twitter from the self-described position of being “all alone” at the White House. On Thursday, he reminded Democrats that their idol and his predecessor, Barack Obama, once backed a crackdown on illegal immigration.

Just a few years ago, Trump pointed out, Democrats strongly supported a law that would have fortified the border with a fence. “It was only when I made it an important part of my campaign, because people and drugs were pouring into our Country unchecked, that they turned against it,” he tweeted.

Virtually every Democrat we are dealing with today strongly supported a Border Wall or Fence. It was only when I made it an important part of my campaign, because people and drugs were pouring into our Country unchecked, that they turned against it. Desperately needed!

Fact-checkers seeking to pounce on Trump’s tweets will be disappointed: they are true. As Byron York of the Washington Examiner documented, Democrats backed the 2006 Secure Fence Act, as well as the 2013 proposal that would have insisted on building a barrier along the southern border. That proposal, known as the “Gang of Eight bill,” also included amnesty for millions of immigrants in the US illegally, however, which is why it was eventually scuttled by Tea Party Republicans.


Back in January, Trump tried to get the Democrats on board with funding the Wall by offering an amnesty for DACA recipients, the so-called “dreamers” brought into the US illegally as children and subject to protections enacted by Obama through executive fiat. When Trump announced he would be canceling DACA as unconstitutional, a federal judge sought to block him. At that point, Democrats walked away from the talks, Trump said.

The reason the DACA for Wall deal didn’t get done was that a ridiculous court decision from the 9th Circuit allowed DACA to remain, thereby setting up a Supreme Court case. After ruling, Dems dropped deal – and that’s where we are today, Democrat obstruction of the needed Wall.

Trump campaigned on building the wall in order to secure the southern border. The issue became acute during the 2018 midterm elections, as several “caravans” of migrants from Honduras, El Salvador and Guatemala made their trek through Mexico and camped at the ports of entry in California demanding to be let in.

Israel constructed a barrier along its border with Egypt between 2010 and 2013, consisting of both a wall and a fence, to stem the flow of asylum-seekers from Africa. The number of illegal crossings dropped from 9,570 in early 2012 to just 16 in 2016.

Trump has not specified which Israeli wall he was referencing, however – Israel has also built a fence around the Gaza Strip and a wall around the West Bank, citing the need to stop terrorist attacks. Palestinians have decried the barriers as “apartheid” and a land grab.

The shutdown that began on Saturday affects one quarter of US government agencies and approximately 800,000 federal workers. Of that number, 380,000 have been told to stay home, according to the American Federation of Government Employees (AFGE). Another 420,000 or so are working but will not be paid until the shutdown is over.