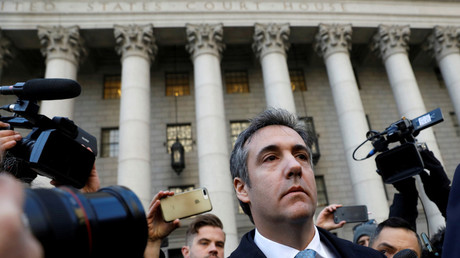 US President Donald Trump has called for his former attorney Michael Cohen to be jailed after he pleaded guilty to lying to Congress about a potential real estate deal in Moscow, tweeting that the lawyer “makes up stories.”

Trump tweeted in response to news that Cohen’s legal team had asked a judge for no prison time, citing his cooperation with multiple ongoing investigations, including special counsel Robert Mueller’s probe into alleged collusion between Trump and Russian officials in 2016.

“Michael Cohen asks judge for no Prison Time.” You mean he can do all of the TERRIBLE, unrelated to Trump, things having to do with fraud, big loans, Taxis, etc., and not serve a long prison term? He makes up stories to get a GREAT & ALREADY reduced deal for himself, and get…..

In the tweet, Trump asked why Cohen was allowed to get away with “terrible” things “having to do with fraud, big loans, Taxis, etc.” — a reference to Cohen’s legal trouble around a tax evasion case involving a New York taxi business — without serving a prison sentence.

….his wife and father-in-law (who has the money?) off Scott Free. He lied for this outcome and should, in my opinion, serve a full and complete sentence.

“He lied for this outcome and should, in my opinion, serve a full and complete sentence,” Trump wrote, suggesting that the only reason Cohen ‘flipped’ and began to cooperate with investigators was to receive a lighter sentence.

In federal court on Monday, Cohen pleaded guilty to making false statements to Congress in 2017 in relation to Trump’s efforts to build a Trump Tower hotel in Moscow.

READ MORE: Why the fuss over Michael Cohen? Lying to Congress is an American pastime (VIDEO)

Cohen had previously claimed that those efforts had ended in January 2016 and had not been discussed widely within the Trump organization. Now, however, he claims that talks about the project continued until June 2016, were widely talked about within the organization, and that a press secretary to Russian President Vladimir Putin had been in contact with the company — something which the Kremlin confirmed over a year ago.

In a follow-up tweet, Trump praised his longtime ally and Republican operative Robert Stone for recently stating that he would “never testify” against him. Unlike Cohen, Stone “will not be forced by a rogue and out of control prosecutor to make up lies and stories,” he wrote, referring to the Mueller investigation. “Nice to know that some people still have “guts!”,” he added.