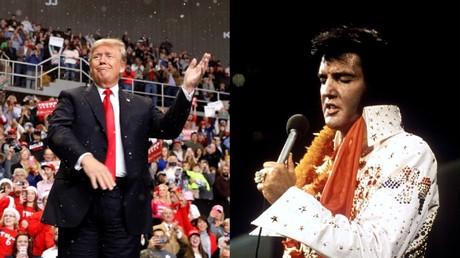 During a Monday night rally in Tupelo, Mississippi – Elvis’ birthplace – President Donald Trump drew cheers and jeers by comparing himself to the beloved rocker. He was in Tupelo campaigning for Republican Cindy Hyde-Smith.

“Other than the blonde hair when I was growing up, they said I looked like Elvis… Can you believe it? I always considered that a great compliment.”

The audience played along, but Twitter was not pleased.

The president is a bona fide Elvis fan, having chosen him to receive the Presidential Medal of Freedom in a White House ceremony earlier this month in which he also honored Miriam Adelson, the wife of Republican mega-donor (and Trump campaign benefactor) Sheldon Adelson.

At least Trump knew what he was getting into when he compared himself to Tupelo’s hometown hero, telling the audience, “You’ll say I’m very conceited.”

Also on rt.com
On Thanksgiving, Trump says he is most thankful for …Trump


Hyde-Smith is polling 54 percent heading into Tuesday’s runoff election, in which she faces Democrat Mike Espy. Neither candidate won 50 percent of the vote on election day. Hyde-Smith has held the seat on an interim basis since April, when Republican Senator Thad Cochran stepped down for health reasons, but she has come under fire recently for comments regarding being “front row” to a “public hanging” and making voting “a little more difficult” for university students.