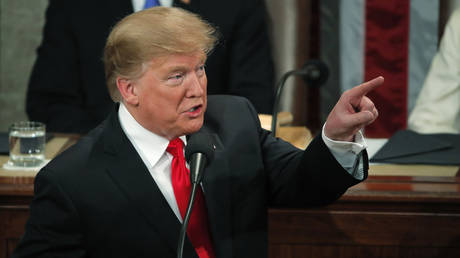 As US border security talks apparently reach another stalemate with a new government shutdown looming on the horizon, President Donald Trump has blamed Democrats for the development by saying they need a distraction.

The president once again accused the House Democrats of refusing to provide enough money for his cherished wall on the Mexico border – an issue that has been a stumbling block on the border security negotiations from the very beginning. He went on to say that the Democratic leadership just does not want the deal to be reached in yet another series of fiery tweets.

I don’t think the Dems on the Border Committee are being allowed by their leaders to make a deal. They are offering very little money for the desperately needed Border Wall & now, out of the blue, want a cap on convicted violent felons to be held in detention!

“It was a very bad week for the Democrats,” Trump wrote, adding that he believes “they want a Shutdown” to have a “new subject” to divert people’s attention from a series of scandals that have recently plagued the party – particularly in the state of Virginia, where the entire Democrat leadership is arguably crumbling under allegations of racism and sexual assault.

It was a very bad week for the Democrats, with the GREAT economic numbers, The Virginia disaster and the State of the Union address. Now, with the terrible offers being made by them to the Border Committee, I actually believe they want a Shutdown. They want a new subject!

Democrats and Republicans are to come up with a border security agreement that would satisfy the president before the February 15 deadline when the stopgap funding of the government expires.

The talks appear to have reached a stalemate this weekend. Acting White House chief of staff, Mick Mulvaney, told Fox News that “a government shutdown is technically still on the table,” adding that the president would never sign any deal “in good faith,” if it involves no funding for the wall or too small an amount.

Also on rt.com
SOTU: Trump urges Congress to ‘choose greatness’; Is that even possible?


Republicans and Democrats on Capitol Hill are still at loggerheads over Trump’s $5.7 billion wall funding proposal. Democratic negotiators have so far indicated that they might agree to allocate only $1.6 to $2 billion for the border wall.

Another sticking point is the funding for detention beds for people arrested by US Immigration and Customs Enforcement (ICE). While the Democrats want the number of beds to be lowered, the Republicans advocate its increase as part of an effort to speed up immigrant deportations.

“We’ve got some problems with the Democrats dealing with [Immigration and Customs Enforcement],” the Senate Appropriations Committee head, Richard C. Shelby (R-Ala.), told Fox News, adding that he is “not confident” the sides would reach an agreement.

Others hoped the shutdown can be avoided. “I am hopeful that this committee will be able to come up with a proposal that we can all support, that the president can sign,” Liz Cheney (R-Wyo.) told CNN’s State of the Union. She also added, though, that the deal would “have to include funding that will allow us to secure the border.”

Also on rt.com
From concrete to steel to flesh: Trump says he ‘will build a human wall if necessary’


The Democrats were seemingly more optimistic about the outcome of the talks. House Democratic Majority Leader Steny Hoyer told CNN he “expected” a balanced agreement while saying he was ready to support funding for the wall amounting to $2 billion.

Another Democrat, Senator Jon Tester (D-Mont.), told Fox News that, even though the lawmakers were “not to a point where we can announce a deal,” he still had “confidence that hopefully we will get something done very soon.”

The current stopgap government funding ended the longest government shutdown in American history, which cost the government an estimated $11 billion dollars. Trump agreed to sign the budget without the $5.7 billion allocated for the wall under the condition that lawmakers would come to a solution in three weeks.