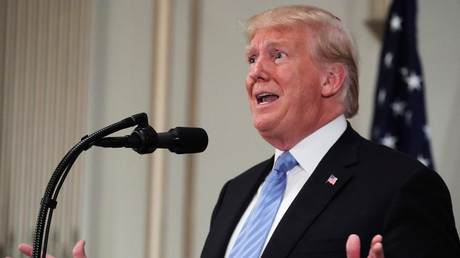 US President Donald Trump has revealed why China has so much “respect” for him – drumroll, please – it’s because of his “very, very large brain.”

Trump made the audacious claim while discussing fraught US-China relations at a press conference in New York on Wednesday. The president declared that he likes China and believes the feeling is mutual before going on to explain why the nation’s president, Xi Jinping, respects him.

“If you look at Mr Pillsbury, the leading authority on China… he was saying that China has total respect for Donald Trump and for Donald Trump’s very, very large brain,” Trump said, speaking of himself in the third person.

The expert in question was Michael Pillsbury – the director of the Center for Chinese Strategy, a conservative think tank in Washington and author of The Hundred Year Marathon: China’s Secret Strategy to Replace America as the Global Superpower.

Trump was apparently referring to Pillsbury’s interview with Tucker Carlson on Fox News last month, in which he described Trump as “so smart” and said the US leader was “playing three-dimensional chess with China.”

Of course, Trump’s bragging comment went down a treat on Twitter, leaving many dumbfounded by the president’s incredible boast.

Just when you think the world is done laughing at us, Trump gives a press conference. With his very large brain.

This just happened. @realDonaldTrump said “China has total respect for Donald Trump and for Donald Trump’s very very large……brain”. This was just said by the President of the country I live in. WTF

Trump’s press conference: “China has great respect for Donald Trump’s very, very large brain”. Is he saying that he has an elephant brain? This may be a breakthrough case study. pic.twitter.com/LNXzyRRM2U