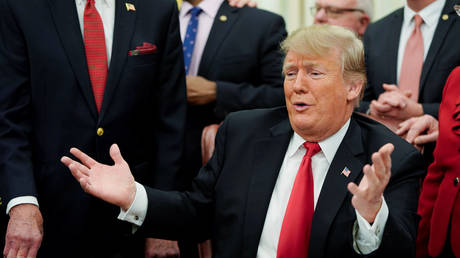 US President Donald Trump has complained that he receives the wrong kind of special treatment from the mainstream media. Anybody else, he says, would be hailed a hero for pulling 2,000 US troops out of the war in Syria.

If anybody but your favorite President, Donald J. Trump, announced that, after decimating ISIS in Syria, we were going to bring our troops back home (happy & healthy), that person would be the most popular hero in America. With me, hit hard instead by the Fake News Media. Crazy!

“If anybody but your favorite President, Donald J. Trump, announced that, after decimating ISIS in Syria, we were going to bring our troops back home (happy & healthy), that person would be the most popular hero in America. With me, hit hard instead by the Fake News Media. Crazy!” Trump tweeted.

Mainstream Western media came down with righteous anger on Trump’s move to withdraw American soldiers from Syria. It has been called “a giant Christmas gift to our enemies” by the Washington Post, a “victory for Iran and Russia” by NBC News, and “a clear win for Putin,” by the Independent.


Trump faced criticism from within his own party ranks, trading verbal blows with Sen. Lindsey Graham (R- SC), who demanded hearings on the president’s plan to withdraw troops from Syria and scale down the 14,000-strong US military force in Afghanistan.

The withdrawals were reportedly the last straw that prompted the resignation of Defense Secretary James ‘Mad Dog’ Mattis. In his farewell letter, the general expressed his dismay at the lack of commitment to US allies, and a lax approach to the perceived threats of China and Russia.

The announced phasing-out of America’s military presence in the Middle East saw another official leave the Trump administration. Brett McGurk, an Obama-appointed American envoy to the US-led anti-Islamic State (IS, formerly ISIS) coalition, resigned in protest over the Syria withdrawal, calling Trump’s claim of victory against IS there “reckless.”

McGurk reportedly planned to step down in February, but decided to leave early with a protesting bang.

True to his longstanding habit of verbally bashing outgoing staff, Trump did not miss out on the chance to take a dig at the two officials, tweeting that he doesn’t know McGurk, describing his resignation as a ‘nothingburger’ hyped by the media.

Brett McGurk, who I do not know, was appointed by President Obama in 2015. Was supposed to leave in February but he just resigned prior to leaving. Grandstander? The Fake News is making such a big deal about this nothing event!

Taking a swipe at Mattis, a retired four-star general who was “ingloriously fired” by Obama, Trump said that he had given him a “second chance” and “all the resources he never really had.”

When President Obama ingloriously fired Jim Mattis, I gave him a second chance. Some thought I shouldn’t, I thought I should. Interesting relationship-but I also gave all of the resources that he never really had. Allies are very important-but not when they take advantage of U.S.

The particulars of Trump’s ongoing war with the mainstream media are well-known. Speaking in Connecticut in May last year, Trump said that “no politician in history has been treated worse or more unfairly.”