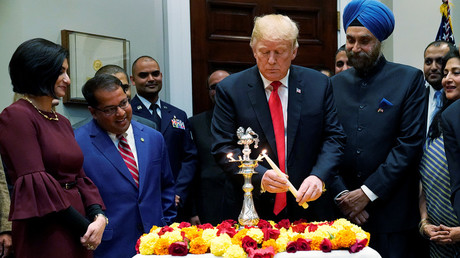 US president Donald Trump lit the traditional Diwali lamp at the White House and tweeted a greeting to the celebrants, only to have Twitter light into him instead over forgetting Hindus, the biggest group celebrating the festival!

Diwali is observed by “Buddhists, Sikhs, and Jains throughout the United States & around the world,” Trump tweeted, along with photos of him lighting the Diya surrounded by aides of Indian origin and flanked by India’s ambassador to Washington. There was just one tiny problem: he left out the Hindus.

Today, we gathered for Diwali, a holiday observed by Buddhists, Sikhs, and Jains throughout the United States & around the world. Hundreds of millions of people have gathered with family & friends to light the Diya and to mark the beginning of a New Year. https://t.co/epHogpTY1Apic.twitter.com/9LUwnhngWJ

The president’s critics in the online #Resistance were quick to pounce on the omission:

Diwali is a predominantly Hindu holiday that is also celebrated by the other 3 religions he lists here. Yet he omitted the Hindus from the tweet. What an incompetent moron 🤦‍♂️🤦‍♂️😂😂😂😂 https://t.co/U2POB7n478

Imagine missing out the largest group who celebrate Diwali, Hindus, in this.

Of course it’s not the big fella himself tweeting – far too erudite – but even the lackeys who send the dull procedural stuff are utter numpties. https://t.co/u96gQUS6yK

Others pointed out that Trump’s ceremony was almost a week off, since actual Diwali was on November 7. The US president had gone to Paris for Armistice Day commemorations, though.

Though the tweet went out from Trump’s personal account, rather than the official @POTUS one, many speculated it was written by one of his staffers instead of the president himself.

In his remarks at the ceremony, Trump did clearly identify Diwali as the “Hindu Festival of Lights,” so leaving Hindus out of the tweet was puzzling at best. It took a little while for the tweet including that mention to be posted as a correction in all but name.